WE all remember the great Leinster championship journeys that the Kildare Minor and U20 hurlers and the minor footballers brought us on last summer. 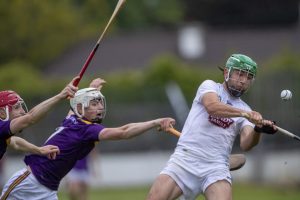 Liam Dempsey was outstanding for Kildare U20 hurlers in their great run in the 2021 Leinster Championship. Photo: Sean Brilly

Well it all begins again this Spring and on paper at least each of the four Kildare underage teams, Minor and U20 footballers and Minor and U20 hurlers, will face stiff challenges to progress in Championship ’22.

First out are the Minor Footballers, under new Manager, Niall Cronin, who have been grouped with Longford, Meath and Offaly in the Electric Ireland Leinster MFC. They open by travelling to Offaly on 19 March before hosting Longford and Meath on 2 March and 20 March respectively.

In the Eirgrid U20 Football Championship, Brian Flanagan’s team, who disappointedly lost to Westmeath last year, face Laois in the Quarter Final on 14 April.

Last year’s Championship was a good one for the Kildare underage hurling teams and for 2022 the Minors, under new Manager, Tom Walsh, are in Tier 2 along with Offaly and Laois in the Electric Ireland Minor Hurling Championship. They will host Offaly on 26 March before travelling to Laois for Round 2 on 9 April. Last year’s Minor Manager, Eoin Stapleton, has stepped up to the U20 role, and his side will face Meath on 2 April and should they win that they will face the winners of Down/Antrim V Laois.

A good return in the Spring competitions could lead to an exciting Summer for Kildare supporters.