1 in 17 stopped at Xmas was bagged 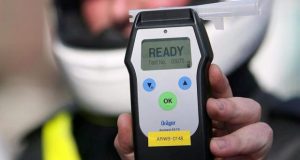 One in every 17 motorists stopped over the Holiday period was arrested for driving whilst intoxicated, it was revealed today (14 January).

In total, 914 people were thus arrested from the 15,759 stopped at 5,681 checkpoints set up nationwide during the Garda Síochána’s Christmas and New Year Road Safety Campaign, which ran from 26 November to 4 January, with the collated figures released today.

The campaign primarily focussed on mandatory intoxicant testing –that is,  detecting those who drive under the influence of alcohol or drugs – but the campaign also focused on speeding, non-wearing of seatbelts, mobile phone use by drivers, in addition to checking on unaccompanied drivers driving on learner permits.

A total of 35 drink and drug arrests were made on New Year’s Day alone, with one-third of these (12) made between 6am and 1pm.

Of the total 914 arrests over this period, a little more than one in five of them (21%) were arrested in the 6am to 1pm period.

While a lot of these figures could easily be blamed on heavy-handedness the night before, a continuing preponderance of a heavy right foot saw 13,950 drivers detected for speeding over this 40-day period.

The number for illegal mobile phone use was only a tenth of this though, with just 1,269 fines issued to motorists over the Holidays.

“I would appeal to all road users to modify their behaviour, to heed road safety advice in order to reduce collisions, avoid unnecessary deaths and to ensure that our roads are safer in 2022”.

“It is astonishing to see the numbers of those who persist to drink and drug drive, as it significantly increases the risk of a fatal collision,” said Sam Waide, Chief Executive of the Road Safety Authority (RSA).

“Inappropriate speed is still an issue and even a five per cent reduction in average speed can reduce fatal collisions by 30 per cent,” he said.

“It is alarming to think that more than a quarter (28%) of all drivers and passengers killed in 2021, in Ireland, were not wearing a seatbelt”.

Cyclists do a Tango for charity in Athy