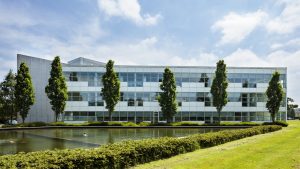 ALDI, the German-based discount grocer continued its Irish expansion and investment drive today (14 January) by opening its new state-of-the-art corporate office in Naas, and confirming it will recruit 600 new store staff this year.

The move reflects Aldi’s continued expansion over the past several years, which has seen its workforce grow to over 4,650 staff throughout 149 stores in Ireland, and the firm has committed to a €320m  investment programme that will see it open a further 30 new stores across the country up to 2024.

Aldi’s commitment to sourcing award winning Irish products has led to significant growth in its national buying and marketing teams, which have expanded from four staff in 2004 to 120 today.

Aldi now works with over 330 Irish food and drink producers, spending over €1 billion with Irish producers in 2021, an increase of almost 20 per cent on 2020, including €250m during the busy Christmas trading period.

“This is more fantastic news from Aldi, another 600 new jobs being created, in addition to the 1,050 added last year,” said the Tánaiste.

This is a real testament to Aldi’s commitment to Ireland and the hard work of its existing team here, and I’m really pleased to see that Aldi will be further increasing its hourly rate and offers a living wage,” he said.

“ A big priority for me is making sure sick pay is available to all employees and it’s great to see that Aldi has a scheme in place”.

Aldi will increase its hourly pay rates for store colleagues from 1 February 2022 maintaining its position as Ireland’s best paying supermarket.

Store Assistants will earn up to a market leading €14.90 an hour, while its entry rate of pay will be €12.90 an hour, matching the Living Wage Technical Group’s recommended rate.