Herity Names Side To Face Carlow In Kehoe Cup

KILDARE Hurling Manager, David Herity, has named a very inexperienced side, from a senior intercounty point of view, for Round 1 of the Kehoe Cup against Carlow which now takes place in Netwatch Cullen Park at 4pm on Sunday. 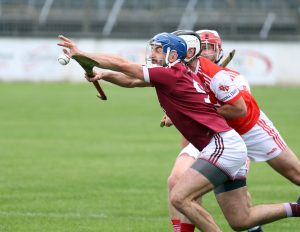 Jack Travers, Leixlip, lines out at midfield for Kildare in the Kehoe Cup clash with Carlow in Netwatch Cullen Park on Sunday Photo: Sean Brilly

Shorn of the services of 12 of his 36 man panel by the involvement of Naas in the AIB Leinster Club Intermediate Final three hours earlier, Herity was forced to turn to the other 24 members of the panel announced earlier in the week although Rossa Stapleton has been added to the subs for Sunday’s game.

Senior intercounty experience on Sunday will be provided by goalkeeper, Paddy McKenna, Cathal Derivan and Mark Delaney in defence, Sean Christianseen in midfield and Gerry Keegan in the forwards. It’s good to see both Delaney and Keegan back. Both have given great service to Kildare hurling and both still have a lot to offer.

Tom Finnerty (Celbridge), Jack Travers and Cian Bracken (both Leixlip) and David Qualter (Maynooth), among others, have been rewarded for good performances in Championship 2021.

As well as the 12 Naas players, noticeable absentees on Sunday include Paul Divilly, Niall O Muineachain and Johnny Byrne.