THERE was bitter heartbreak for Kilcullen in the AIB Leinster Club Junior Football Championship Final at St Conleth’s Park on Saturday as they lost out to Offaly Champions, Clonbullogue by five points in a pulsating game 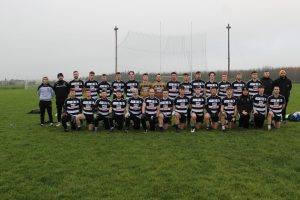 Goals win games they say and so it proved in Newbridge today as Clonbullogue scored five and had three on the board by the first half water break. Each of those goals could be said to have come from turnovers conceded but Ruairi O’Neill, Keith O’Neill and Sean Foran all benefited for the Offaly champions to raise green flags.

Kilcullen opened their scorimg with a David Marshall free on 9 minutes but they got a real boost when Jake Murphy goaled right after the water break to put them right back in the game. The Kildare champions were to added a further three points without reply before half time to leave just two in it at the break at 3-0 to 1-4, Darren Barker with a free and one from play and David Marshall with his second.

When Marshall popped over his thirds just after the restart things began to look even better for the Rags.

There was still a point in it with three minutes left on the clock when Clonbullogue got what appeared to be a controversial goal with substitute Joe Foran finishing to the net standing at the upright from Jamie Guing’s mark.