By Richard Commins
NAAS have Croke Park in their sights after adding the AIB Leinster Intermediate Hurling Championship to their three Kildare senior crowns in a row with a deserved seven-point win over Wexford’s Oylegate-Glenbrien at St. Conleth’s Park on Sunday. 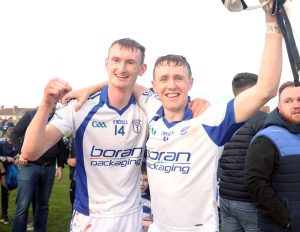 Having beaten the Intermediate champions of Dublin, Kilkenny, and Wexford on the way to becoming only the second Kildare team – after Ardclough in 2006 – to win a competition that has been dominated by Kilkenny clubs since its inception in 2004, there is no doubting Naas’ credentials.

Naas got the goals at the right times, including a fortuitous third after 42 minutes, but that score was the culmination of a power surge from the county town side after half-time that saw them hit 1-4 without reply.

Jack Sheridan was the scorer-in-chief as ever and will deservedly make most of the headlines. He scored 2-4, all bar two points coming from play and his opportunistic goals in the first half meant that Oylegate-Glenbrien were playing catch-up all day. The Wexford men were doughty opponents, though, and after Sheridan’s second goal pushed Naas six points clear after 25 minutes, the away side hit back with 1-2 in the run-up to half-time to leave it on a knife-edge.

James Burke instigated the first Naas goal after four minutes with a perceptive ball out to Shane Ryan on the stand side and the corner forward raced past the cover towards goal. His shot was pushed out by goalkeeper Eddie Mernagh but Sheridan was on hand to double on it in the air and find the net.

Sheridan’s second goal on 25 minutes stretched their lead to six. Between them Sheridan and Cathal Dowling dispossessed corner back Tomas Cosgrave and Dowling’s neat handpass sent county his county colleague through to finish low past Mernagh.
That left Naas 2-5 to 0-5 ahead before Oylegate-Glenbrien’s best spell of the match brought the gap down to a point at half-time (2-5 to 1-7), their goal blasted home by Podge Doran after Ciaran Hourihane had broken through the defensive cover and passed across goal to the unmarked full- forward.

Two minutes after the interval, Damien Reck’s effort from way out the field levelled matters and momentum seemed to be with the South Wexford club. Naas moved up a gear after that, though, and after points from Dowling, two from Sheridan and Kevin Whelan’s forward foray up the left wing for another, they got the stroke of luck all champions need.

Dowling, a regular thorn in the opposition defence, hit a high ball towards the town goal from around sixty metres which Mernagh watched all the way but somehow, he lost his bearings and allowed the sliotar to drop in behind him and into the net. That put Naas 3-9 to 1-8 in front and they never looked likely to lose the initiative from there.

Naas face Tooreen of Mayo next weekend and victory there will see the club bringing a team to Croke Park for the second time in a matter of weeks.