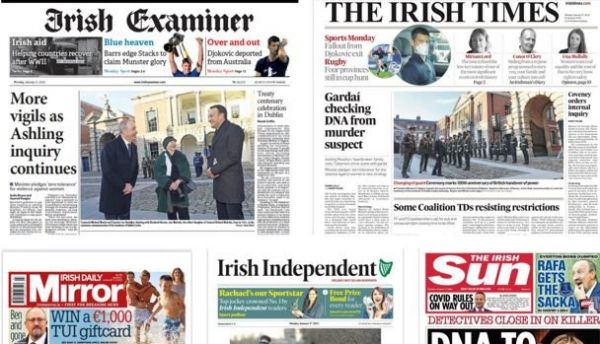 Monday’s papers are dominated by the investigation into the murder of Ashling Murphy.

The Irish Times reports that the investigation into the murder of Ms Murphy remained focused on a man being treated for wounds in a Dublin hospital on Sunday night. 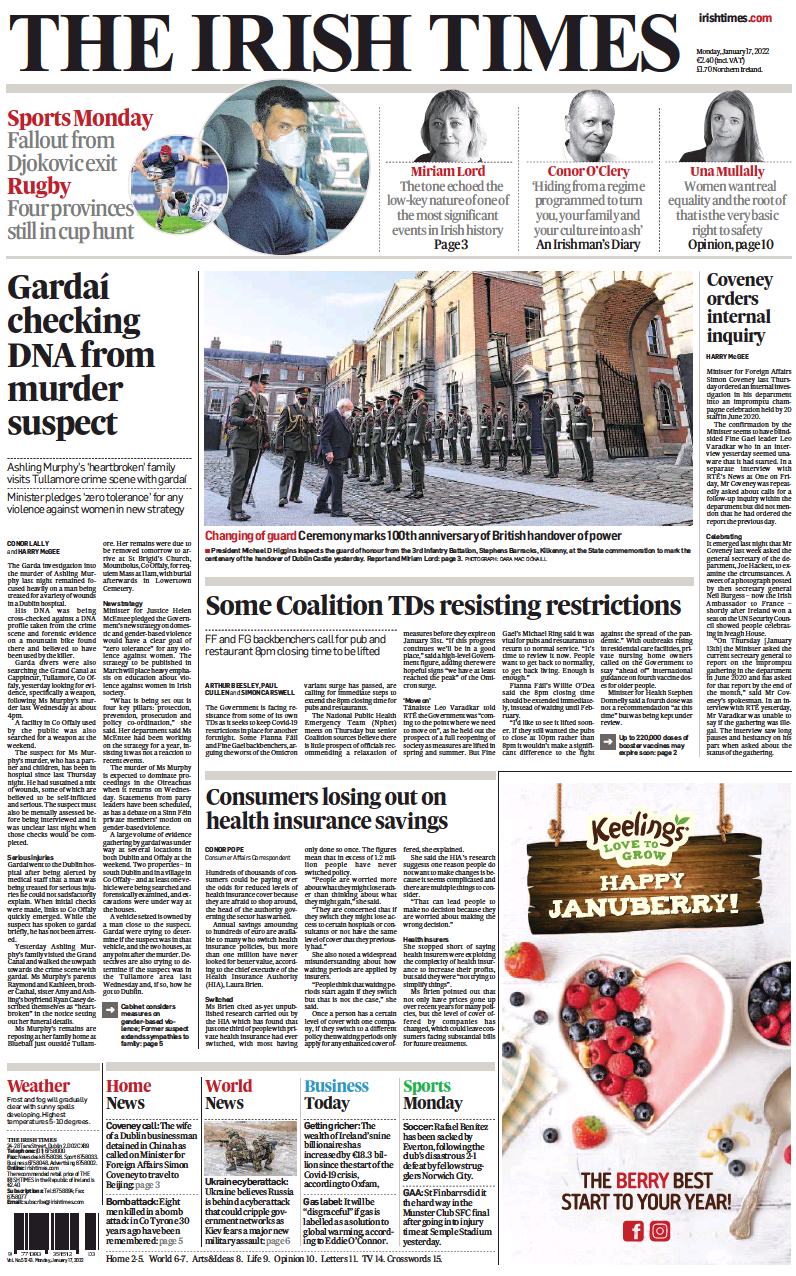 The Irish Examiner also leads with the investigation into the murder of Ashling Murphy, with Minister for Justice Helen McEntee pledging the Government’s new strategy on domestic and gender-based violence would have a clear goal of “zero tolerance” for any violence against women.

The front page of today’s Irish Examiner and @ExaminerSport

Elsewhere, the Irish Independent reports that Gardaí are ready to interview the new suspect in the investigation. 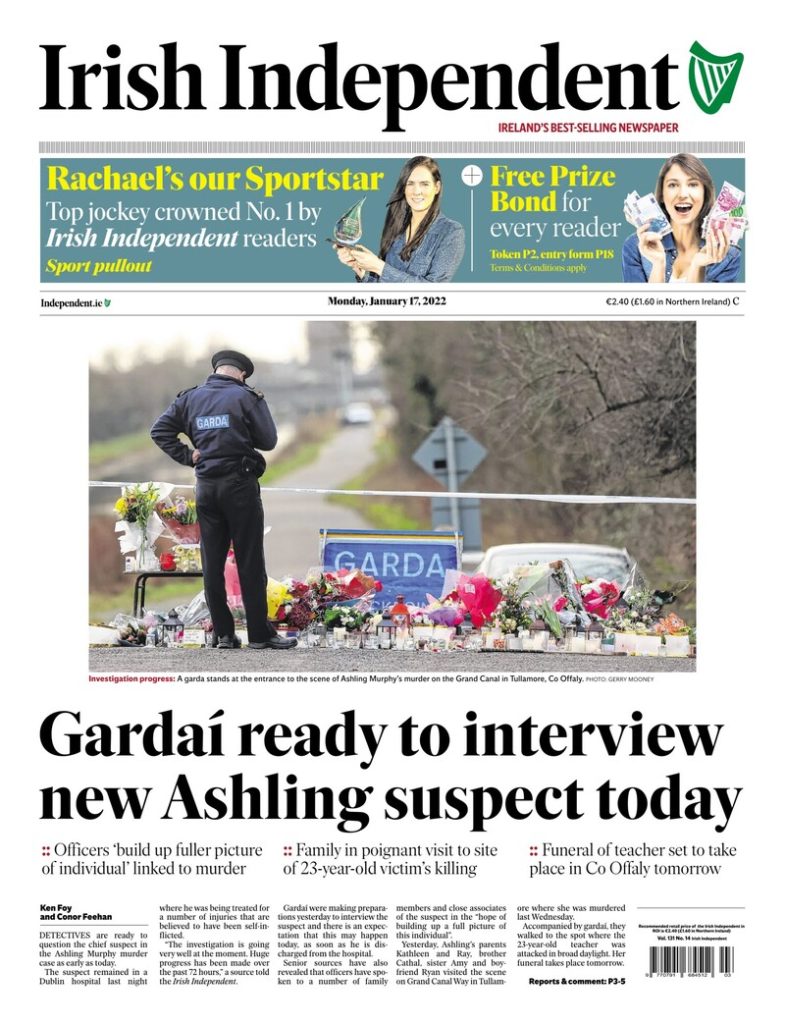 While the Irish Daily Mail report that Gardaí are closing in on the suspect after having collected further evidence over the weekend. 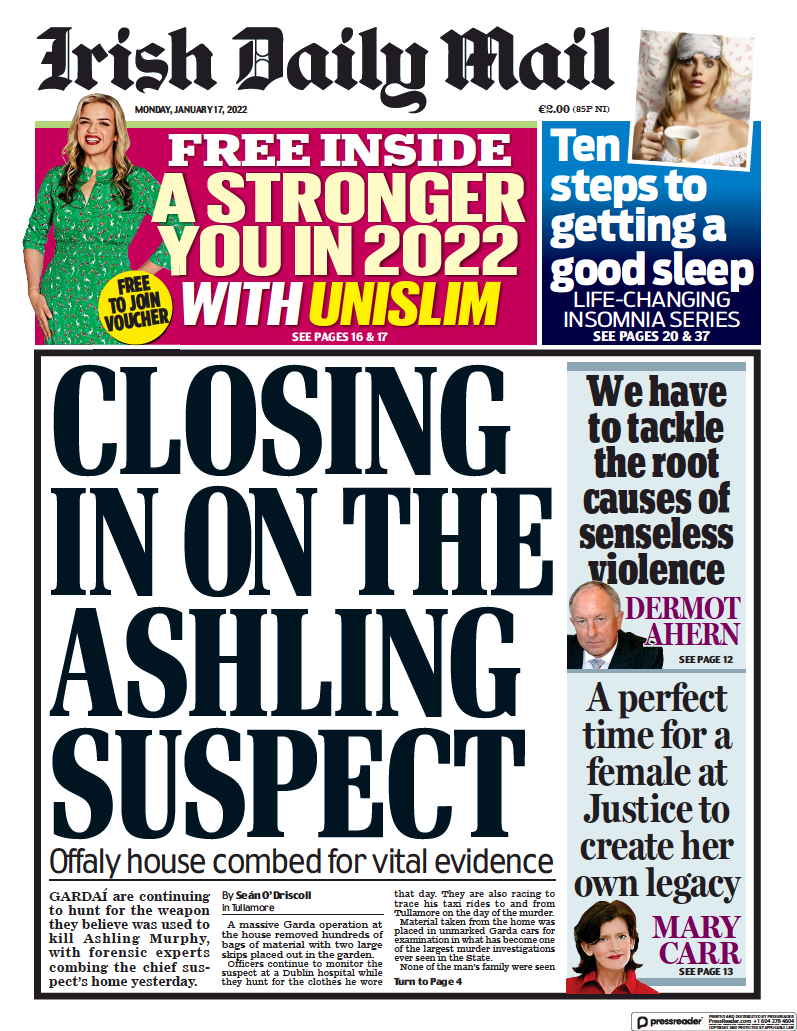 Both the Irish Daily Star and the Irish Daily Mirror lead with how Ms Murphy’s family visited the Grand Canal and walked the towpath towards the crime scene with gardaí on Sunday. 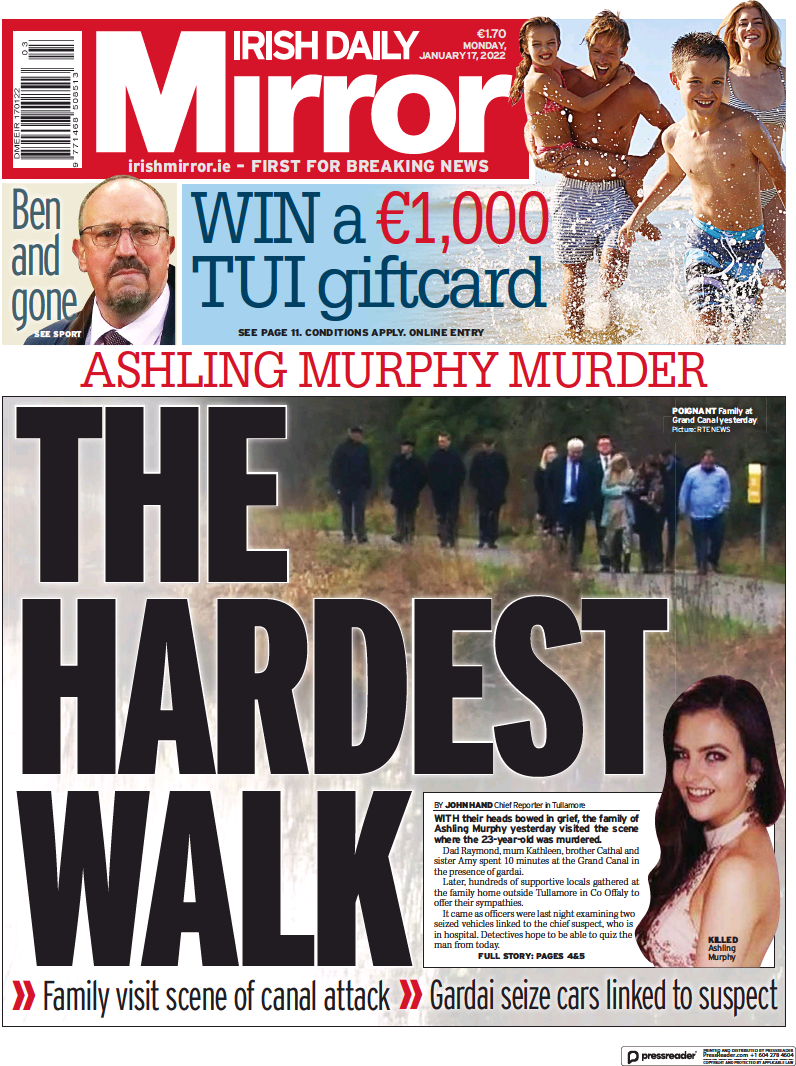 And the Belfast Telegraph reports about a proposal for politicians in Northern Ireland to be able to “double-job”.

Morning readers! Stay with @beltel for all your breaking news. Here’s a look at the front page of the Belfast Telegraph this morning:https://t.co/ZFlfbJQwqj pic.twitter.com/Qi4ds6sIRO

Boris Johnson’s efforts to “save his own skin” as the heat increases over Downing Street parties dominate the British papers as the working week begins.

The Daily Telegraph reports the British prime minister was questioned by senior civil servant Sue Gray as part of her investigation into “partygate”.

‘Johnson questioned by Gray over partygate’#TomorrowsPapersToday

Boris Johnson is set to “axe” senior officials “as he tries to save his own skin”, according to the Daily Mirror.

Labour are quoted on the front of The Guardian accusing Mr Johnson of targeting the BBC in a desperate attempt to save his own premiership.

Guardian front page, Monday 17 January 2022: PM accused of attacking BBC to save his own skin pic.twitter.com/orLUPtXRGq

The Daily Express refers to Mr Johnson’s allies as saying he will fight tooth and nail to save his political future with a blitz of popular policies.

Tory MPs, including former Conservative leader Iain Duncan Smith, call in the Daily Mail for Keir Starmer to apologise for drinking with colleagues in a Labour office in April.

The Times says Mr Johnson will call in the military to stem the flow of migrant boats crossing the Channel, while The Independent reports child refugees are being forced to share rooms and even beds with adult strangers due to increased numbers.

Meanwhile, The Sun reports Queen Elizabeth will not help Prince Harry as he attempts to arrange police protection while in the UK, in a story also covered by the Daily Star.

World number one men’s tennis player Novak Djokovic has been deported from Australia and branded an “icon of anti-vaxxers”, according to Metro.