THE refixed Naas CBS V Marist College, Athlone quarter final has been confirmed for Saturday next, 23 January in Kinnegad at 1pm. 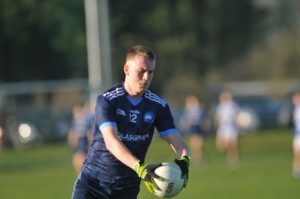 Kilcock’s Sean O’Sullivan will be one to watch for Maynooth SLS as they face Scoil Mhuire, Clane in the Leinster GAA PP Football “A” semi final in St Conleth’s Park on Sunday Photo: Martin Rowe

Naas CBS won the original fixture on Saturday week last, 3-13 to 3-10, but following an objection by Marist College to Leinster GAA over an infringement of the substitutes rule by Naas CBS the match was refixed for Saturday next.

Meanwhile the All Kildare semi final between Scoil Mhuire, Clane and Maynooth SLS will take place in St Conleth’s Park on Sunday next with a 1pm throw in.

Clane defeated St Mel’s Longford 3-5 to 1-8 in one quarter final two weeks ago while Maynooth, who had that excellent earlier victory over St Pat’s Navan, defeated  Good Counsel Wexford, 2-8 to 1-7, to reach Saturday’s derby semi final.