LAOIS 0-9 (Laois win 6-5 on penalties)
By Richard Commins
A hugely disappointing performance from Kildare saw them lose out on sudden-death penalties to neighbours Laois in the O’Byrne Cup semi-final at Netwatch Cullen Park on Wednesday night. 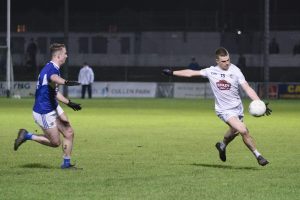 The misfiring Lilywhites were unrecognisable from the free scoring outfit that put Westmeath and Carlow to the sword in their group games, managing only to score seven times from 25 attempts at the target.

Division 3 Laois were almost as profligate, managing their nine scores from their 25 attempts. They edged a low-key first quarter, going in 0-3 to 0-2 ahead with two points from Seán Moore and one from Eoin Lowry; Paddy Woodgate with one from play and one from a free for Kildare.

A fluke Daniel Flynn goal from a floated ball from the left wing which made its way straight to the net in the 24th minute looked like being the only goal of a poor second quarter before two quick-fire Laois points from Evan O’Carroll and Moore put them level a minute before the interval.

Woodgate, though, sent Kildare in at the break leading by 1-3 to 0-5 with an excellent score from play.
Two more points from O’Carroll and a free from Gary Walsh, with a Jimmy Hyland free and fisted Jack Sargent point in reply, left the sides level at 1-5 to 0-8 by the second water break as thoughts began to consider a penalty shoot-out.

The level of profligacy sadly went up a level in the final quarter with each side only adding a single point. Woodgate’s free put Kildare ahead but Gareth Dillon rounded off the scoring with ten minutes still remaining. Kildare shot five wides in succession from that point onwards with Laois weighing in with three and a groan went around the ground when the stadium announcer incorrectly flagged that extra-time would be played.

Thankfully it went straight to penalties. Laois scored their first three but missed the next two while Woodgate missed Kildare’s first and Daniel Flynn their fourth; Mark Donnellan, Jimmy Hyland and Paul Cribbin scoring to make it 3-3.

Sudden death followed with Walsh and Hyland both scoring before the next four were missed (Mark Barry and Moore for Laois; Woodgate and Daniel Flynn for Kildare). Brian Daly converted for Laois to put the pressure on Donnellan but he also finished with aplomb for a second time before facing Cormac Murphy with the tenth kick for Laois.

Murphy finished high into the roof of the net to heap the pressure on Cribbin, whose earlier effort had just crept in. This time he shot straight at Laois ‘keeper Matthew Byron to send the O’Moore men through to meet Dublin.

For Glenn Ryan and his management team, it’s very much back to the drawing board after a night which will certainly dampen supporter expectations heading into a tough Division 1 campaign that starts in eleven days against Kerry.

Ryan will have been pleased to see Mark Donnellan, Ben McCormack and Aaron Masterson enjoy game time for the first time this season but a number of the panel may fear they have played themselves out of contention to face the Kingdom in Newbridge.