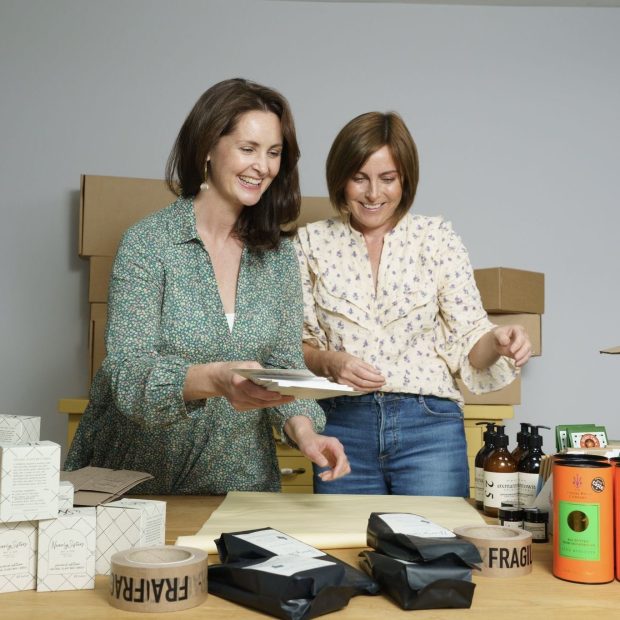 NEARLYSISTERS, based in Clongorey,were winners of the Covid Impact Award – Small Business Category at the recent ActionCOACH Business Excellence Awards 2021.

Speaking about their win, business partners and sisters-in-law  Nic Hennessy and Sue Walsh said they’re honoured to receive this award, adding that with the help and guidance from Rory Smyth they’re excited about what 2022 has in store.

“We definitely did not expect to win anything at all,” said Nic, who explained that they’ve been working with business advisor Rory since March or April of last year, a tremendous support who has given them great advice.

Both restricted from working during the first lockdown in 2020, the duo embraced an idea they had been toying with. They decided to bite the bullet and NearlySisters online gifting company was born.

Nic’s background is performing arts – she studied musical theatre in London and was vocal coaching one-to-one in Ireland. “I had a few choirs going, so I was really deep in the performing arts world,” she said, adding that when the pandemic hit in March 2020 “the rug was pulled from under me overnight… I kinda continued working a little bit on Zoom, but what I do is quite technical in vocal coaching so it’s difficult to do it, it’s challenging to do it over Zoom… couple of weeks on Zoom and then it just – it couldn’t continue.”

Sue explained that she was in retail all her working life and similarly the rug was pulled from beneath her.”Overnight, retail shut and I got the call from my boss to say that they had made the decision to close the doors, even though at that point the government hadn’t enforced anything… they felt that it was the right thing to do and then a couple of days later it was announced that all retail, non-essential retail, would close.”

Starting a business during a pandemic is probably not the most ideal of scenarios and Sue said it was quite daunting. She went on to say: “I’d always worked for somebody, you know, there’s always a salary coming in, and you become quite comfortable I suppose… with retail as well there are no shortages of jobs. I felt, you know, I was always in a job, I was never in a situation where I was unemployed. So, I was scared, definitely, about the future and the pandemic… and what Covid was.”

Nic added that they’ve children “and we were trying to homeschool, start a business, keep sane… we were scared, it was a scary time. Not for just us, but for everyone.”

Still, alongside the challenges, there have been wins – Sue pointed to an amazing Valentine’s and Mother’s Day last year, Easter was “super”, and they became a limited company in May which she described as a “great win.”

Sue said the consumer “wants to support local, wants to buy Irish, wants to know that when they buy something that the impact and the environment is considered… that’s huge for us, sustainability, we want to lessen, you know, our impact on the environment as much as possible, so everything we have is sustainable, earth-friendly, recyclable, so we consider all of that even when we take on our suppliers, that’s huge for us.” Sue noted that their corporate portfolio has “really grown” and said companies “care about things like that now which is great to see.”

Those who choose to gift with NearlySisters (nearlysisters.ie) are supporting Irish makers, crafters and businesses the length and breadth of the country, including in Kildare – when they started, Kildare man Warren Hayes of Coolree Design was one of the first makers they got in touch with. Nic and Sue have carefully sourced high-quality products that help customers choose to spend their money more consciously when they gift, and everything is wrapped in sustainable packaging.

According to Nic:“The two of us are huge supporters of Irish craft and artists, always have been. We’ve always had that mantra of keeping it local and supporting local… there’s some beautiful products out there that the world don’t know about yet. So, we decided to go down that route and create a gifting company, an online gifting company, whereby you could buy things online and we would giftwrap it, put in a personal message and then send it wherever you wanted it to go, all around Ireland and worldwide shipping as well.”

Their offering includes several NearlySisters products – they have two candles, collaborated with a coffee company (Coffee Perfection) in Dunboyne, and have worked with Lily O’Briens and have their own chocolates. “This year, part of our focus is on developing our own brand,” said Sue.

NearlySisters will undoubtedly continue to flourish and strengthen. As Sue remarked, “it’s about getting the brand out there and getting known for what we do… our hope now is that enough people received a NearlySisters bundle, whether it was through their company or privately, that the word will spread… a) that we’re nice people and b) that we do a really good job, that we stand by our values.” 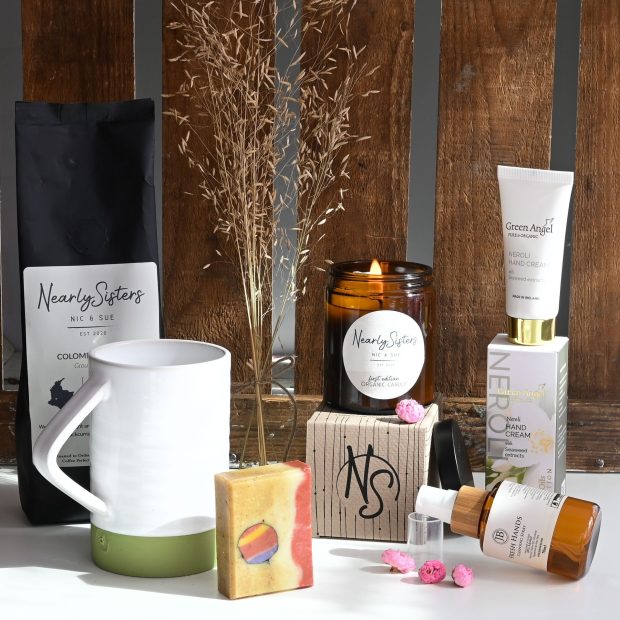