KILDARE senior hurling manager, David Herity, has made four changes in personnel on the team that will start Round 2 of the Kehoe Cup against Westmeath in Raharney on Sunday, throw in 2pm. 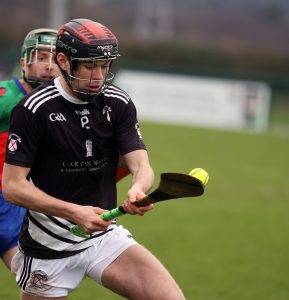 Maynooth’s Cathal McCabe returns to the Kildare team for Round 2 of the Kehoe Cup away to Westmeath on Sunday. Photo: Sean Brilly

Into the team for Sunday come, Sean Bean (Maynooth), in goals, Sean Christianseen (Clane) at right half back as well as Cathal McCabe (Maynooth) and Johnny Byrne (Coill Dubh) at right and left half forward respectively.

Herity obviously still has to contend with the absence of his Naas 12, who will be in action in the AIB All Ireland Club semi-final in Ballinasloe around the same time, (why the clash) but the likes of Paul Divilly and Niall O Muineachain are not too far off returning to full fitness.

After a strong start against Carlow in Round 1, the inexperienced Kildare team, with eight debutants, eventually went under in Round 1 last weekend after Carlow brought on their big guns at half time. Westmeath, meanwhile, had an eight point victory over Meath last Sunday.

Kildare Hurling Team to face Westmeath in Round 2 of the Kehoe Cup in Raharney on Sunday at 2pm, Referee Padraig Dunne (Laois)