By Kevin Egan
NO one would have failed a maths class for arithmetic errors in counting scores or substitutions this afternoon in Kinnegad, as Naas CBS passed tough exam with flying colours to qualify for a Leinster Schools “A” semi-final clash with Coláiste Choilm of Tullamore next week. 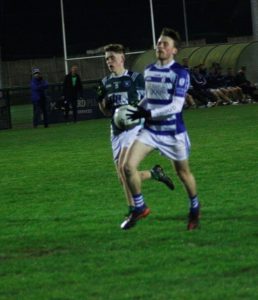 Nine points was the final margin as goals from Niall Dolan, Kevin Cummins and Colm Dalton ensured their school’s progression, and if anything that scoreline failed to do justice to what was a dominant performance from Pádraig Cribben’s side.

Their failure to convert goal chances meant that the door was still left open for the Marist right up until the last five minutes, but the complete control that the CBS enjoyed in the middle third meant that the Athlone side never got the chance to pull off a smash and grab raid to sneak a result.

Marist got out to a dream start, hitting the back of the Naas net after only ten seconds thanks to Matthew Whittaker, then kicking on to lead by 1-2 to 0-1 with five minutes gone. However the midfield battle was one-sided right from the start, as Naas CBS won the lion’s share of possession and set up a series of chances, several of which were spurned as the wide count mounted.

However any creeping sense of nervousness in the Naas attack was settled when a good run and pass from Daniel Lenihan set up Niall Dolan, and the Raheens attacker ran hard and straight before rifling a perfect shot inside the near post of the Marist goalkeeper.

Roscommon underage star Conor Hand was causing the Naas CBS defence plenty of problems when he was given any sort of supply and his scores kept Marist in the game in the first half, but in pretty much every other facet of play, Naas were imperious. Fionn Cooke hit the foot of the post with a good goal chance but Naas didn’t have to wait too long for their second green flag, with Kevin Cummins adding the finish after another poor Marist kickout was seized and punished.

Dolan had another goal ruled out for a square ball infringement while he and Cooke also had goal chances blocked from close range by Daniel Meeley and Conn O’Hara, so the lead was still scant at the interval, 2-7 to 1-7.

Gavin Thompson opened the scoring in the second half with a free but excellent replies from Chulainn Dowd and Bobby Nugent suggested that Marist weren’t going to exit the championship lightly. However while Naas struggled to score as freely as they would have liked, at half back and midfield they were controlling the game, winning turnovers and completely minimising the influence
of Marist talisman Senan Baker.