ON the eve of yet another massive game for Naas hurlers, an AIB All Ireland Club Intermediate Hurling semi final against Tooreen of Mayo in Ballinasloe on Sunday, we take a look back at The Supporter Column in this week’s Kildare Nationalist, out now. The Supporter also looks at Kildare’s opening two games in the O’Byrne Cup.

Lord Edward Fitzgerald once said that “Leinster House does not inspire the brightest ideas.”
That was over 200 years ago but little has changed and some might argue that the absence of the brightest people from our government seat might be a factor in that. 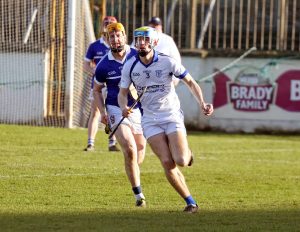 Richard Hogan drives out of defence to set up an attack against Oylegate-Glenbrien in the AIB Leinster Club IHC Final at St Conleth’s Park Photo: Sean Brilly

The German experimental physicist Georg C. Lichtenberg lived around the same time as Fitzgerald although it’s unlikely the two ever met. Lichtenberg once said that “everyone is a genius at least once a year. The real geniuses simply have their brightest ideas closer together.”
I suspect Lichtenberg hadn’t much interest in the GAA but it would strike you that Croke Park is neither awash with geniuses nor bright ideas.

However, nearly twenty years ago someone must have had a brainwave and on Sunday the people of Naas were belatedly grateful.
In hindsight it seems strange that when the All-Ireland Club Championships started in 1970 that the competitions were limited to senior teams. After all, Intermediate and Junior championships were a common feature of the fixture list at inter-county level at that time.

It was more than 30 years later when some bright spark came up with the idea that provincial and national competitions could be expanded to include a county’s champions from lower grades and the competitions have gone from strength to strength since then.

Sunday was a case in point, with a huge crowd descending on Newbridge. It’s becoming a well-worn path for Naas folk who may claim squatters’ rights at St. Conleth’s Park at this stage. The Oylegate-Glenbrien folk were out in numbers as well although with both clubs sporting blue and white colours it was hard to distinguish one group from the other. Either way, it was a sizeable crowd, not something
Newbridge is necessarily accustomed to for a hurling match.

Naas were superb. They were deft when they needed to be, rugged when the circumstances called for it. Cool of head and fleet of foot. It started at the back. Where the visiting goalkeeper had his moment of horror, giving Cathal Dowling’s skyscraper free passage to his net, Cormac Gallagher in the Naas goal was the proverbial rock. He made a couple of saves that were probably hit straight at him, but they were hit hard and firm and perhaps it was his positioning that made it look easy.

Gallagher’s hands seemed to have a magnetic impact on any ball that dropped from its orbit anywhere near his crossbar. He should ask Loctite for sponsorship.

I never thought I’d reference Phil Collins here and I am sure it won’t happen again. You can’t hurry love and you can’t hurry Richie Hogan, either. At times you’d be screaming inwardly at Richie to react to a situation, but like a teenager getting ready for school, there’s no rushing Richie. He’ll be ready in his own time and invariably will emerge with ball in hand ready to clear his lines.

Forgive me if I digress a little but there was one time when a mouse invaded my parents’ bedroom and a two-hour drama ensued as the folks tried their darndest to catch the little scoundrel. As he led them a merry dance around the room before retreating under the bed for a time-out, the father armed himself with a broom and a spatula, as you do, the former in an attempt to sweep his opponent from under the bed,
the latter in order to inflict mortal wounds on the poor curly tailed one.

With light beginning to dawn the poor fella finally staggered out from under the bed, his little eyes begging my father to put him out of his misery. Animal rights activists look away now but one tap of the frying utensil and the exhausted Mickey keeled over and breathed his last breath. May he rest in peace.

That saga sprang to mind on Sunday when a three-man Oylegate attack down the right wing looked set to tear the Naas defence asunder. The trio bore menacingly down on goal and you waited for the net to bulge only for Ross Kelly to position his sturdy frame in the attacker’s path. The Oylegate lad bounced off Ross, hit the ground in an inelegant heap and coughed up the ball, with much the same air of resignation as our rodent friend.

We shouldn’t be surprised by Naas anymore. When they take to the field Tooreen’s mere mortals next weekend it will be one day short of 800 days since our standard-bearers last lost a championship match and despite covid and the lack of quality opposition within the county, they have continued to push themselves, developing to the point where they would clearly hold their own in the senior championships of Kilkenny, Wexford, or Dublin. Heady times.

I ventured to Carlow last Thursday to watch Kildare hold a training session on foreign fields. It was good of Carlow to provide a venue, pay for the lights and provide a few locals to assist in their drills. #CarlowRising may be in need of the magic blue pill if that was anything to go by.

After the Westmeath win (by a mere eleven points) I gave my thoughts on player performances but that would be a waste of effort this time around and I am getting close to the bottom of the page you’ll be pleased to know. Kildare were so dominant that 4-19 was the minimum you would expect them to return. If pushed for man-of-the-match I’d point to Paddy Woodgate with another all-action display allied to some cool finishing (although I wonder about his size against Division One opposition). Kevin and Daniel of the Flynn clan did Kevin and Daniel things. Most of them positive.

Speaking of training sessions, a little birdie with a nest in Hawkfield tells me that Glenn and his merry gang have enlisted the assistance of yet another All Star footballer, from outside the county this time, in their quest to get the very best out of the current panel. No stone unturned.

The Supporter Column appears in the Kildare Nationalist every Tuesday.