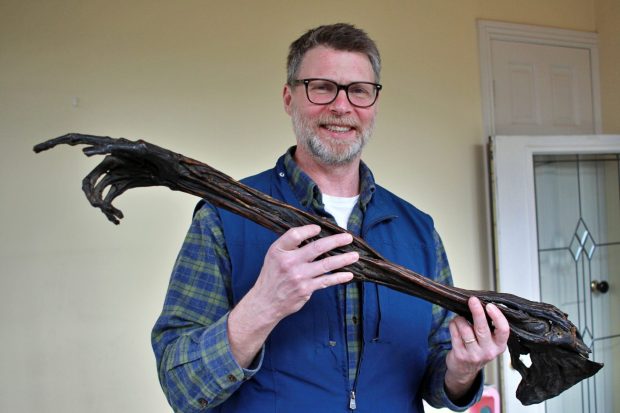 AN American professor who has been travelling in the footsteps of 19th century Irish pugilist Dan Donnelly found his way to Kilcullen last week and ‘shook hands’ with the fighter.

Patrick Griffin is the Madden-Hennebry Professor of History at Notre Dame University in Indiana and came across Dan Donnelly’s story some years ago. He says he always had an interest in boxing, and as he was doing research, Donnelly’s name came up ‘over and over’. “I began digging into the story, and lo and behold I found the tale about the arm. So I have been doing a sort of ‘ghost-chase’ for some time, following it.”

The ‘chase’ brought him to Dublin and London, both cities where Dan Donnelly lived, and also to Edinburgh where his arm is reputed to have been at one time an anatomical exhibit.

“I spent a lot of time in St Giles and Holborn in London, and went to The Castle Tavern where he would have gone drinking a lot. And I also spent quite a bit of time tracing his story in Dublin.” Quoting a well worn adage amongst historians, ‘you can’t write about a place unless you have been there’, Patrick says going to places with Dan Donnelly connections has been ‘fascinating’. “You dig through layer and layer, and the place begins to come alive in a different way. Tracking Donnelly’s ghost and trying to find his arm has been a lovely way for me to make my way through various cities.”

He says there’s also a ripple effect when undertaking an endeavour like this, especially amongst people he has met in his travels. “Everybody I’ve told the story to has become absolutely fascinated, and I have people who are waiting for me to send pictures of the arm. Now it has become as mythic for me in my life as has been the story of Dan Donnelly himself.”

In Edinburgh, which he describes as having been the ‘centre of the resurrectionist trade’ in bodies and body parts, supplied to two centres of anatomical medicine there in the 18th and 19th centuries by grave robbers, he was given lots of fascinating information. “Such as how the body parts were preserved, and that in Ireland there was an extensive business in sending body parts to Edinburgh … there was a voracious demand for human flesh.”

After Dan Donnelly’s death, his body was retrieved by grave robbers, and though he was reburied after protests from his followers, the arm had already been amputated and became an anatomical exhibit for student doctors. It subsequently became a curiosity exhibit in London and Belfast before ending up in Kilcullen, a short drive from Donnelly’s Hollow where the fighter had his famous battle with English champion George Cooper in 1815.

Patrick Griffin was facilitated in seeing the arm by Josephine Byrne, whose late husband Des kept what had been a centrepiece exhibit in the family’s Hideout pub in Kilcullen since the early 1950s. The family retained the artifact after selling the pub in 1996. Since then it has been a key element in a number of exhibitions about Irish fighting men, in New York, Boston, the Ulster Folk Museum, Croke Park, and the University of Limerick.

Prof Griffin’s family originated in Schull in West Cork, and he is also Director of the Keough-Naughton Institute for Irish Studies at Notre Dame. His main area of expertise is Colonial and Revolutionary American history and early modern Irish and British history with an emphasis on trans-Atlantic links.
His publications include The Townshend Moment: The Making of Empire and Revolution in the Eighteenth Century (Yale University Press, 2017), a chronicle of two British brothers who helped incite revolution in America and insurgency and reform in Ireland, and The People with No Name: Ireland’s Ulster Scots, America’s Scots Irish, and the Creation of a British Atlantic World (Princeton University Press, 2001). He also is editor of Experiencing Empire: Power, People, and Revolution in Early America (University of Virginia Press, 2017).