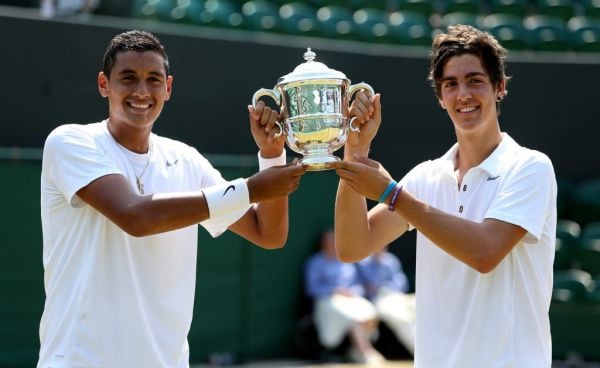 Jamie Murray and Bruno Soares’ Australian Open hopes ended in the third round of the men’s doubles but Nick Kyrgios and Thanasi Kokkinakis continued their crowd-pleasing run.

Kyrgios and Kokkinakis caused one of the upsets of the tournament in the previous round by taking out top seeds Nikola Mektic and Mate Pavic, with Kyrgios then accusing the coach and trainer of the Croatians of threatening him.

There was another packed crowd and lively atmosphere on Kia Arena as Kyrgios and Kokkinakis, who were Wimbledon junior doubles champions in 2013, took on Ariel Behar of Uruguay and Ecuador’s Gonzalo Escobar.

The Special K’s show rolls on 👊

And the Australians came through 6-4 4-6 6-4 to reach a grand slam doubles quarter-final for the first time.

There was disappointment, though, for eighth seeds Murray and Soares, who could not capitalise on a good start and fell 3-6 6-7 (7) 6-3 to Italian duo Simone Bolelli and Fabio Fognini.

The British-Brazilian pair, who led 5-1 in the opening set, had a match point in the second-set tie-break.

Joe Salisbury and Neal Skupski, playing with Rajeev Ram and Wesley Koolhof respectively, will both try to reach the last eight on Monday.