Kilcullen scrapbook is a real time machine of local history 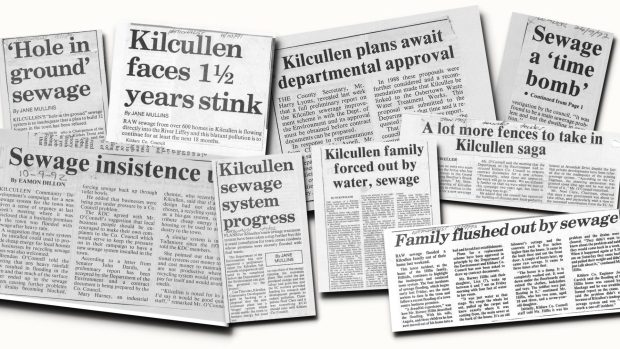 A SCRAPBOOK of local newspaper clippings put together in the 1980s-1990s about Kilcullen has proved to be a treasure trove of information about key developments in the town at the time.

The collection, put together by local resident PJ Lydon and rediscovered by him when he was getting Christmas decorations from the attic at his Logstown home, records both the minutiae of Kilcullen life in the ‘local notes’ pages as well as sequential reports of a range of key community campaigns of the time.

Notable amongst these last are the attempts to get a ‘Link Road’ on the northern end of the then village from the new Kilcullen Bypass (M9), which wasn’t successful, and the eventually successful campaign to have a non-functioning sewerage system upgraded so Kilcullen could expand.

Other stories document a rescue of the then almost moribund Kilcullen Tennis Club (plus ça change, plus c’est la même chose … a similar endeavour has been successfully carried out over recent years), the tricky prospect of rebuilding the then derelict Town Hall into a viable entity, and dealing with the consequences of the demise of the Irish Rubber factory, at the time the biggest employer in Kilcullen.

Celebrations and commiserations, births, marriages and passings, and all the life milestones in between are contained in the 199 pages of clippings, all from the Kildare Nationalist and the Leinster Leader. Social photographs of presentations, gatherings, and community achievements all add colour — albeit in black and white only — to the local life reports. In many of those, of course, there is sad nostalgia too where people depicted have passed on.

The local notes, often considered the poor relation of the bigger stories, are in fact the calendars of a community’s life, with short reports of meetings, card game results, social organisation agendas and activities, and more. It is only when looking back from the viewpoint of a quarter of a century and more later that their true value is clear.

The scrapbook is providing a fascinating source of heritage and history stories for Kilcullen community publications, including a number of podcasts by this writer.

PJ Lydon’s find, and his original dedication in keeping the scrapbook, shows the value of local newspapers to the communities within their publication area. One wonders if there will be anything similar in another 30 years, from the very transitory publishing of the digital age.