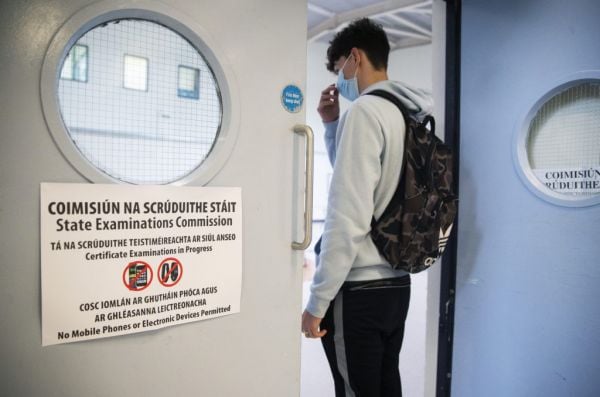 Universities have issued a warning that having a hybrid Leaving Cert this year could result in more students missing out on first-choice college courses due to increased use of random selection.

As The Irish Times reports, students, parent groups and many school principals have called for Leaving Cert candidates to be given a choice between teacher-assessed grades and sitting the exams in June due to disruption to their education caused by Covid-19.

However, the Irish Universities Association (IUA) has warned the Government that teacher-assessed marks will lead to grade inflation and higher CAO points. This, it says, means that high-scoring students risk missing out on their first-choice college courses.

“We understand the desire of students to have a hybrid approach to the Leaving Cert, but it would result in equally challenging issues for students further down the line,” said the IUA’s director general, Jim Miley.

“It means significant numbers of students will get their exam results later, and more college places will be issued on a random basis. This has consequences such as unfairness for students and greater pressure on accommodation.”

Pól Ó Dochartaigh, deputy president of NUI Galway and chairman of the CAO, also expressed concern that a hybrid system would mean some students could end up in college without ever having been tested in a State exam.

It is estimated that about 25 per cent of this year’s Leaving Cert candidates did not sit Junior Cycle exams on the basis that the exams were cancelled in 2020, and they did not have a transition year.

“That means some will be going into university without ever having sat a State exam. Do they expect to get a degree without exams? What kind of preparation is that? There are pressure points in life, not just in school or university, where you have to perform. All this is preparation for that,” he said.

Mr Ó Dochartaigh said he was not surprised that students supported a hybrid model when they were offered a choice in a recent opinion poll.

“If you say to someone you can have a good prize doing an exam and a better prize by not doing on, they will opt for the latter,” he said. “If we admit students who genuinely haven’t been tested, some, genuinely, won’t be able to cope. Are we giving them false hope and wasting another year or two of their lives?”