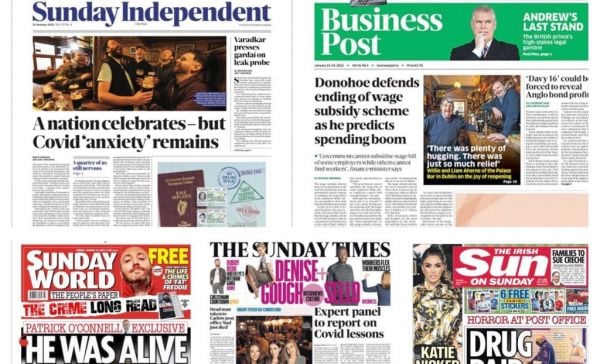 The country’s reaction to lifted Covid restrictions and next steps in the pandemic are the subject of Sunday’s front pages.

The Sunday Independent reports that Covid ‘anxiety’ remains as the nation celebrates, with a quarter of the population nervous as the scale and speed of restriction removals comes as a “big shock”.

The Sunday Business Post meanwhile reports that Minister for Finance Paschal Donohoe has defended the ending of the wage subsidy scheme as he predicts a spending boom, saying the Government cannot subsidise the wage bill of some employers while others cannot find workers.

Tomorrow’s front page. Pick up a copy in stores or subscribe at https://t.co/u5ystSGUtr pic.twitter.com/r0wfFf7Iuu

The Sunday Times says Government leaders are to begin talks within weeks on the appointment of an expert group to review the handling of the pandemic and report on lessons for future crisis management, and separately notes fears over a Russian navy drill.

The Irish Sun on Sunday, the Irish Mail on Sunday and the Sunday World lead with the incident that saw the body of an older man taken to a post office in Carlow in an apparent attempt to claim his pension.

In Britain, the front pages report on tensions within Whitehall and Downing Street, and carry new information about the situation in Ukraine.

The Sunday Times carries Muslim Tory MP Nusrat Ghani’s claim she was sacked as transport minister in 2020 due to her religion.

SUNDAY TIMES: Sacked as a minister ‘because I was a Muslim’ #TomorrowsPapersToday pic.twitter.com/w5L6O0uXve

Boris Johnson was on a “war footing” with civil servants last night over a return to the office, according to The Mail on Sunday.

The Sunday Express gives its top spot to poll results showing 72 per cent of Britons want Prince Andrew, the Duke of York, stripped of his title.

Information released by British foreign secretary Liz Truss suggesting the Kremlin is planning a puppet regime in Ukraine is on the front of The Sunday Telegraph.

‘UK claims Putin is plotting a puppet regime in Ukraine’#TomorrowsPapersToday

The Observer reports No 10 staff have had their swipe card data logged by the investigation into alleged lockdown parties in Downing Street.

Tony Blair has told The Independent the Labour Party must take “centre ground” now to win back the red wall.

Sunday People splashes a warning that rises in the cost of living will leave the poor to starve to death on its front page.

Celebrity Katie Price faces jail after breaching a restraining order, according to the Sunday Mirror.

And the Daily Star Sunday says Geordies are the Brits best prepared for the apocalypse.