NEXT Sunday, 30 January, is a big day for the hockey players in Newbridge College as the Senior Hockey Girls team will take on Holy Child, Killiney in the Leinster School Girls Senior Cup Final at 2.30pm in UCD. This is the first time that the College has reached the Final and all in the College would like to wish the team the very best in the Final.  A huge achievement for all involved. 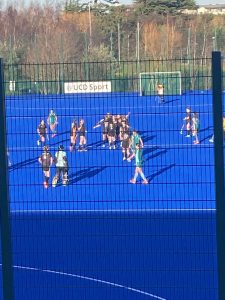 Not a vintage performance but a great win against a good side. Newbridge started strong and were 1 up after just 5 minutes from a superbly worked team goal from some quick sharp passing. It was large bouts of defending from then on and an equaliser came just before half time.
A similar pattern followed in the second half with great last ditch defending and some superb saves from the goalkeeper. Then a break away in the last minute and a flash cross from the left found a Newbridge stick with time to flick it into the net for a 2-1 win that sees us in good form going into the Plate Quarter Final against Alexandra College next week….
Results: Minor B v Wesley 1-2; Junior A v Rathdown 2-1; Senior TY v Wesley 0-4.

RUGBY
Senior 2ND’S  v Presentation Bray
The Senior Seconds headed to Bray to take on Pres Bray in the second of their group stage matches. The hosts started well but failed to make the most of early opportunities and would be limited to a missed penalty in the first half. The College grew into the game and John R Walsh and Hugo Owens managed to round off two scoring chances. Mark Young added the extras to the Owens try and at the break the College led 12-0.
The second half saw the College take control of the game and dominated attack and defence. Walsh showed his light feet as he danced through the home defence to bag a second. Todd Lawlor then zig- zagged his was through the 22 and dotted down for a try. Young added the extra two in each case. Adam Doyle then finished the move of the game as he dived over unhindered in the left corner. As the game wound down the Wicklow side pushed into the College 22 and ran a penalty and from the resulting ruck scrambled over for a try. As the conversion was landed the referee blew for full time for a 31-7 win for the College.
Special mentions go to Ollie Udell, Ruairi Munnelly, Shane Davitt and Diarmuid Enright.