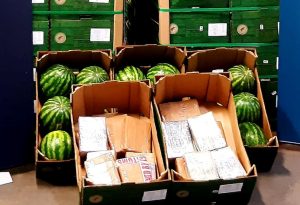 The man arrested on Saturday (22 January) following the seizure of 20Kgs of cocaine at Dublin Port has been released today (26 January) without charge, and a file will be prepared for the DPP.

As part of the ongoing investigation targeting persons suspected of involvement in transnational organised crime, a joint operation was conducted involving the Revenue Customs Service, the Garda National Drugs and Organised Crime Bureau and the Wicklow/Wexford Garda Divisions.

A vehicle was stopped in Dublin Port and in a subsequent search of a refrigerated unit, ‘Laddie’ the sniffer dog located 20kgs of cocaine, with an estimated value of €1.4million amongst a shipment of watermelons.

The 22-year-old man was arrested under Section 2 of The Criminal Justice (Drugs Trafficking) Act 1996 and detained at Blanchardstown Garda Station until his release on station bail today.