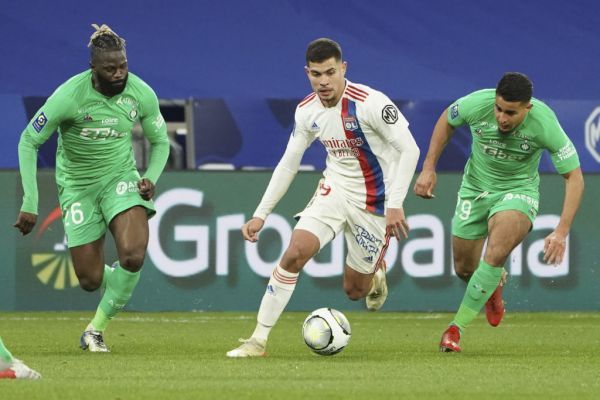 Lyon have  denied agreeing a deal with Newcastle over the sale of midfielder Bruno Guimaraes.

According to reports on Wednesday morning, the Premier League side had agreed a fee for the 24-year-old Brazil international who was set to undergo a medical while away with his national team this week.

However, the Ligue 1 side insist there is no agreement in place.

They said in a statement on their official website: “Olympique Lyonnais categorically denies the false information disseminated by many media reporting an agreement between Newcastle and OL for the transfer of Brazilian international midfielder Bruno Guimaraes.

“In this transfer window period, where the slightest rumour is often presented as reality, Olympique Lyonnais reminds that only information officially released by the club is to be taken into consideration.”

Guimaraes, who joined the French club from Atletico Paranaense in 2020, has played 25 times for Lyon this season and is considered a key player.

Newcastle are keen to bring him to St James’ Park before next Monday’s transfer window shuts as they further try and strengthen their squad for the Premier League relegation battle.

Thank you @Atleti, you will always be in my heart ❤️🤍 but it’s time for a NEW adventure 🖤🤍 pic.twitter.com/WeASwVdRpS

The Magpies, currently training in Saudi Arabia, have already brought in Kieran Trippier and Chris Wood and have been linked with a host of other names, including Jesse Lingard, Dele Alli and Diego Carlos.

Newcastle boss Eddie Howe confirmed “a lot of hard work” was being done back at the club while the squad was away.

“I think they have no news to tell anybody at the moment, but I’m keeping regularly updated and finger on the pulse as to what is happening,” Howe told NUFC TV.

“As we know, it is a difficult window and we just hope we can get a couple more additions to boost the squad.”

Newcastle will play a friendly against Saudi Pro League leaders Al-Ittihad on Friday.

Paul Dummett, Joelinton and Jamaal Lascelles, who all came off in the 1-0 win over Leeds on Saturday, continue to be assessed along with Federico Fernandez.

“We obviously want him (Fernandez) back as quickly as possible but we don’t want to push him to where he has a setback, so we have got to try and manage the next bit right,” Howe said.

Before heading out to Saudi Arabia, Howe had defended the club’s decision to travel for a mid-season training camp amid criticism from human rights campaigners.

“The boys have been really good amongst each other, really positive,” said Howe, following Wednesday’s training session.

“The facilities are very good here, the pitches are a good standard, we’ve used the gym regularly since we have been here, so we have had everything that we needed.

“A couple of team building activities as well, so really pleased so far, but more work to be done.”