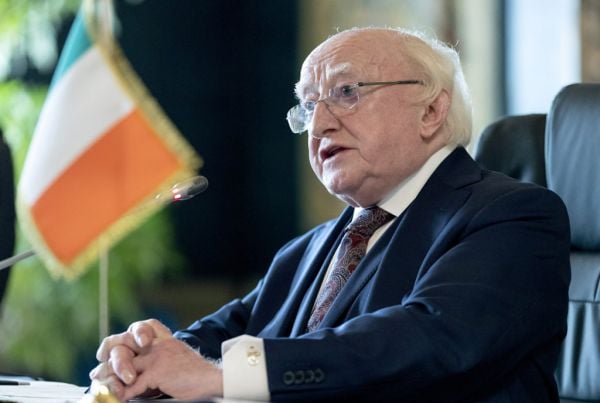 A series of events will take place over the weekend in Derry to mark the anniversary of the date when 13 civil rights protesters were shot dead by British soldiers on January 30th, 1972, in the city.

Another man shot by paratroopers on the day died four months later.

While many consider him the 14th victim of Bloody Sunday, his death was formally attributed to an inoperable brain tumour.

President Higgins will deliver a recorded message to the Bloody Sunday families on Sunday.

The president’s message will be shown publicly during the commemorative event Beyond the Silence, which will take place before a limited audience in Guildhall Square.

His message will be broadcast on a large screen and the occasion will be livestreamed to an online audience.

The event will be hosted by actor Adrian Dunbar and will feature tributes to the victims, as well as music and public performances.

Guildhall Square will fall then silent on Sunday at the precise time when 50 years earlier paratroopers opened fire on civil rights marchers in the Bogside.

Earlier on Sunday, relatives of those who were shot and injured will take part in a walk of remembrance which will set out from Creggan Shops and make its way to the Bloody Sunday Monument in Rossville Street for the annual memorial service and wreath-laying ceremony at 11am.
Mr Martin will lay a wreath and is also expected to meet privately with the families of those killed.

“It will be exactly 50 years to the day and the date since Bloody Sunday.

“The families will be gathering at the Creggan shops at 9:15am and we are going to walk to the Bloody Sunday monument for 11am.

The 2022 Bloody Sunday Memorial Lecture will be delivered at Derry’s Guildhall on Saturday by Mr Corbyn, a long time supporter of the Bloody Sunday families.

The MP for Islington North in London will give his lecture at the same location where most of the hearings in the Bloody Sunday Inquiry took place.

The inquiry, chaired by Lord Saville, replaced the verdict of the Widgery Tribunal which had largely cleared the soldiers and British authorities of blame.

Lord Saville’s inquiry found that none of the casualties were posing a threat or doing anything that would justify their shooting.

It said no warning was given to any civilians before the soldiers opened fire and that none of the soldiers fired in response to attacks by petrol bombers or stone throwers.

Saville found there was “some firing by republican paramilitaries” but that on balance the Army fired first.

Former British prime minister David Cameron told the House of Commons in 2010 that the killings were “unjustified and unjustifiable”.