Lidl announces 750 new jobs, with pay rise for all of its workers 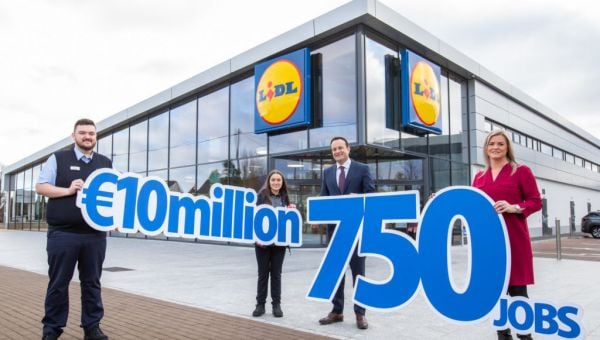 Supermarket chain Lidl will recruit more than 750 new employees to its Irish operations this year, while also introducing a pay increase for all of its workers.

The new jobs will be in a variety of operational and office-based roles across the retailer’s 214 stores, four regional distribution centres and Dublin head office.

Lidl on Thursday also announced a €10 million investment in pay increases for its workforce of 6,100 across the island of Ireland, with all employees benefiting from an increase from March 1st.

The pay rise recognises the efforts of the supermarket’s frontline workers and is in addition its commitment to pay the new Living Wage rate of €12.90 as recommended by the Living Wage Technical Group, the retailer said.

Welcoming the 750 new jobs, Tánaiste Leo Varadkar said: “Lidl’s decision to hire an additional 750 staff this year is a real vote of confidence in the company’s existing teams here and indeed the retail sector and the Irish economy as a whole. There will be in a variety of roles, catering to a wide range of skills.

“I’m particularly pleased to see Lidl is awarding a pay increase to staff, meaning they will continue to offer a living wage. Congratulations to the entire Lidl team.”

The new roles are being created to support Lidl’s growing footprint of stores nationwide, with expansion plans to see the retailer run 17 property projects in this financial year.

On the pay rise, Maeve McCleane, director of human resources at Lidl Ireland & Northern Ireland said: “Recognising hard work, rewarding success, and celebrating achievements have always been core to Lidl’s People strategy so of course we’re pleased to be in a position to further recognise the commitment and dedication demonstrated by our frontline and supports teams, particularly as an essential business throughout the pandemic.”