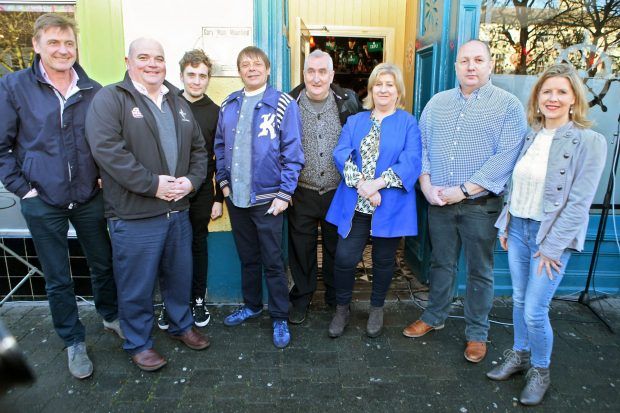 THE Made of Athy plaque honouring Gary ‘Mani’ Mounfield has been missing for a number of months.

The Stone Roses and Primal Scream bassist is the son of Anne Patricia Farrell from Knockroe, Maganey, who emigrated first to London before setting in Manchester. In Maganey, she lived a few doors away from Johnny’s Marr’s mother.

Made of Athy’s Colm Walsh explained that it went missing about six months ago. According to ***Classic Pop Magazine***, the plaque ‘turned up briefly online with an asking price of £5,500 but disappeared shortly afterwards.’

The plaque dedicated to Mani drew large crowds to Athy’s Emily Square in November 2018 when it was unveiled outside The Emigrant.

Before officially launching the plaque, the musician laid flowers on his mother’s grave in Maganey, accompanied by his wife and two sons. They also visited the house his mother grew up in.

“It feels like coming home. Not in a weird, bullshit, American plastic Paddy kind of sense… my family and Johnny Marr’s family lived five doors apart,” Mani told the  ***Kildare Nationalist*** at the time. “I’ve been to the graveyard, I’ve put flowers down for all my family and all that. It’s good to be here for a good reason, because I only ever come here to bury people now. So it’s good to come here and celebrate something. My mam, she’s watching somewhere, she’d be so super proud. It’s a homecoming of sorts – I feel good.”

The plaque was the fourth to be unveiled as part of the Made of Athy initiative, honouring the connections with Athy of well-known names and faces from Neil Hannon of the Divine Comedy to Jack L.