INSPIRED by their captain Tony Brosnan MTU Kerry Campus reached their first Sigerson Cup semi-final since 1999 when they completed that historic three in a row, after outclassing Maynooth University in this quarterfinal clash at the North Campus Pitch on Tuesday afternoon. 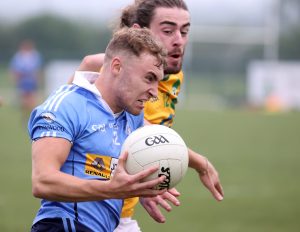 The football was fast, controlled and committed with a defensive setup that completely shut out a pretty sterile Maynooth attack. Then with Mark O’Shea lording matters at midfield , the MTU Kerry attack shredded a porous Maynooth defence with Kerry players Dara Moynihan and Jack Savage weaving their magic while the off the ball running of Paul O’Shea and Tomás Ó Sé created the chances that captain Tony Brosnan executed the precision of a hired assassin.

The game was as good as over at half time as MTU Kerry Campus despite falling behind to an early Sam McCormack point were dominant in every sector with Greg Horan again excelling in his sweepers role while Mark Ryan playing his first game was a revelation around the middle.

Dara Moynihan was everywhere and after levelling the contest in the fifth minute but then minutes later Mark O’Shea set up Jack Savage for a well taken goal. At the end of the first quarter and Dara Moynihan and Tony Brosnan added points before Brosnan sent in a ball over the top for Tomás Ó Sé and MTU Kerry were now racing clear, leading by 2-3 to 0-1.

It was all one way traffic as Brosnan and Moynihan added two more before Shane O’Sullivan converted a Maynooth free for only their second score in 25 minutes with the wind.

By half time MTU Kerry Campus one foot in the semis with points from Ó Sé and Brosnan as the Kerry side led 2-7 to 0-2.

The second half has just a stroll for MTU Kerry though Maynooth did put in an improved display with Shane O’Sullivan converting two frees and substitute Billy Maher firing over a 40th minute point with his first touch but MTU Kerry were still 2-10 to 0-5 and coasting. Jack Savage and O’Sullivan swapped scores but Maynooth were running out of road at the three quarter stage. Paddy McDermott of Naas  was probably his side’s best performer and. Kieran Dwyer, Shane O’Sullivan and Donal Conlon tried hard but MTU Kerry was the superior force on the day.

Tony Brosnan and Jack Savage kicked points for fun with Maynooth being completely outclassed and two Tony Brosnan goals put the icing on the cake for Tralee as both sides ran their benches.

Maynooth manager Davy Bourke was brutally honest post game “There is another level out there and that became glaringly obvious as the game went on. Fair play to them they are a very good side, I think their Kerry seniors like Dara Moynihan were operating at a fair level there. Tony Brosnan was lethal and he was better than I thought he was. It must be a hard full forward line in Kerry to get into, if he cannot get into it. We were coming down here to try and get in front and get an early goal to put Tralee on the back foot but we couldn’t do it. They were well set up and I am telling you they are a threat to all those left. They could give it a fair rattle. We were outclassed today by a better side so no complaints”