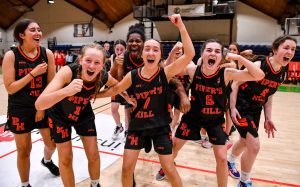 A strong opening half from the Kildare side had them ahead 29-15 going into the second half. St. Finian’s fought hard to pull it back, outscoring Pipers Hill by four points in both second-half quarters, but it wasn’t enough to overcome the lead built by Pipers Hill.

MVP in the game was Pipers Hill’s Niamh Farrelly, who was also top scorer with 18 points. Her teammate Stephanie Nnabuihe was a close contender for MVP, strong in rebounds under the basket, she also scored well with 16 points. Next top scorer for Pipers Hill, Naas was Kate O’Neill with 6 points. For St. Finian’s Swords, it was Sophie Staunton and Stacy Walsh who led the offense, picking up 17 points each, with Lara Walsh next highest at 7 points from the game.