FOUR players from Leixlip Amenities Liffey Celtics Basketball team have been included by Head Coach, Andy Gill, in the 16 person Ireland U16 women’s squad ahead of the Home Nations in Scotland in May. The tournament takes place in Dundee from 6-8 May and will see Ireland take on Scotland, England and Wales. 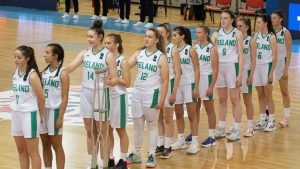 Head coach Andy Gill said: “It is never an easy time when selection comes around, but is a necessary part of the process. I would like to commend all the players in this new squad and those not selected on their fantastic attitude, work rate and coachability. We will be preparing in earnest, over the next six weeks, for a Home Nations tournament in Scotland, where these players will be truly tested and final selection will be made.”

Ireland’s U16 women will be competing in the FIBA U16 European Championships in Sarajevo, Bosnia from 19 – 27 August.