MAYNOOTH University Town FC have received a BYE into the First Round of the Extra.ie FAI Senior Cup following the Preliminary Round Draw which was conducted today by former Cork City and Shelbourne player, Ollie Cahill and Extra.ie Sports Editor, Adam Lacey. 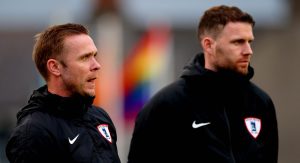 The Preliminary Round Draw saw seven teams, including MUT FC, receive a BYE to the First Round while 12 more teams were drawn to contest the six fixtures which are to be played on weekending 24 April.

MUT FC created history by reaching the Quarter Final of the 2021 FAI Cup where they eventually lost out to Cup Finalists, Bohemians.