IN this week’s Kildare Nationalist, in your shops now, we again outlined the plight of Clane Boxing Club which is still without a premises in which to train, or at least one that they can afford. We post our report again here.

A few short months ago we featured Clane Boxing Club and it’s Coach, Paul Roberts, on these pages as we outlined their frustration at not being able to secure a premises in the Clane or surrounding areas in which the club could train and store their equipment. 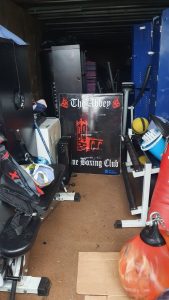 Clane Boxing Club’s equipment in storageThe hope was that by highlighting their plight someone would come forward to offer a premises to use or at least a premises that could be rented at a reasonable cost.

Clane Boxing Club Coach, Paul Roberts, has been in touch with us in the last few days, almost in tears, as he confirmed that his club is still without a premises and is very likely to now cease to exist.

No one came forward or if they did the rental cost was way outside the range of Clane Boxing Club.

“We are struggling badly” Paul Roberts told us fighting back tears over the club he set up and which he cherishes. “I’m just getting to the point now where I need to see if there is anywhere in Co Kildare that wants us. I’m looking for help really here as there is nothing in Clane to rent that is affordable and of course we can’t afford to buy. Sports Grants have now issued so we have missed out on that,” Roberts explained.

“I do have people to help me but I’m not a big business so I can’t afford the rental prices being quoted. I’m half attempted at this stage to hand all our equipment over as I’m done with it now but I would like to get something for the kids that I coach. I only have three boxers as I can’t take any more at the moment, all the other boxers have gone which is a terrible shame as many boxers are athletes who need all our support.”

Without the use of a gym or a premises Paul Roberts hasn’t seen his boxers for a year and a half and some have moved on more or less. “I’d be disappointed with the support from politicians and while outdoor sports have flourished indoor sports have struggled forcing some like ours to close.”

Paul Roberts is making a final appeal to the Clane area or failing that to any area of Co Kildare that feels they need  boxing club.

Boxing is Ireland’s most successful Olympic sport and you only have to look at the esteem in which Kildare boxers such as Eric Donovan, Gary Cully and Katelynn Phelan are held as well as the likes of Kellie Harrington and Katie Taylor to see how these athletes are seen as role models.

The athletes that the likes of Paul Roberts coaches are the athletes who would benefit most from such coaching. This help can only be provided if someone can come forward with a premises for Clane Boxing Club.