IN this week’s Kildare Nationalist, out now, we have 20 Pages of Sports Coverage including: 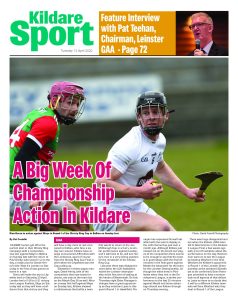 Coverage of Kildare’s Minor and U20 Hurlers in Leinster Championship

Preview of Kildare U20 Footballers meeting with Laois with Manager, Brian Flanagan

ATHLETICS: Part 1 of the Picture Parade from the Allianz Cumann Na mBunscoil Cross Country in Hawkfield

Round up of Kildare athletes results at home and abroad

HORSE RACING: Great results for Irish in Aintree and reports on success for local trainers/jockeys and owners

……….and much more in your Kildare Nationalist, in your shops now or on www.kildare-nationalist.ie