KILDARE overcame a disastrous start to put up a huge score against London in the second game of their Christy Ring Cup campaign at St Conleth’s Park on Saturday afternoon. 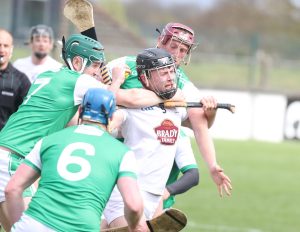 One of Kildare’s heroes, Paul Dolan, is challenged by London’s Dean Bruen and the London defence in the Christy Ring Cup Round 2 game in Newbridge on Saturday Photo: Sean Brilly

London were delayed en route but they had the boost of a bizarre own goal from Kildare corner back Niall Ó Muineacháin in the opening minute, the Celbridge veteran completely over-hitting a pass back to goalkeeper Paddy McKenna who watched helplessly as the ball went over his head.

As if that wasn’t bad enough for the home side, they were far too lax in allowing Jack Goulding through the heart of the defence to fire a second goal after five minutes.

However, Kildare recovered, despite a few nervy moments and by the time London centre back Paddy McNaughton was sent off midway through the half for a frontal charge on Cathal McCabe, the home side had moved 0-10 to 2-2 ahead.

Despite never hitting their best form, Kildare had the game effectively wrapped up by half-time, leading by 0-18 to 2-5. The second half developed into a training spin for the home side and two goals from Jack Sheridan and one from sub Mark Delaney along with a succession of points put the game to bed.

London did finish strongly, scoring 1-2 in injury time, their goal coming from Fiachra O’Keeffe, but it was comfortable for David Herity’s side, who have now won their opening two games by a combined 51 point margin.

They face a big step up in opposition next Saturday with Derry coming to Newbridge.