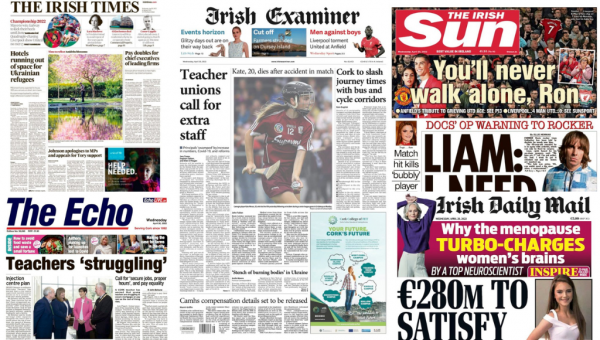 Proposals regarding the housing of Ukrainian refugees, the death of a young camogie player in Co Galway and calls for increased pay from teachers’ unions are some of the front page stories on Wednesday.

The Irish Times reports: ‘Hotels running our of space for Ukrainian refugees’ ahead of a Cabinet meet today at which Government ministers will discuss placing people arriving from Ukraine into temporary mass accommodation.

The paper also covers the British House of Commons vote, scheduled to take place later, which will see MPs vote on whether they believe British prime minister knowingly misled the UK parliament over a gathering he attended in Downing Street which was found to have broken Covid restrictions. 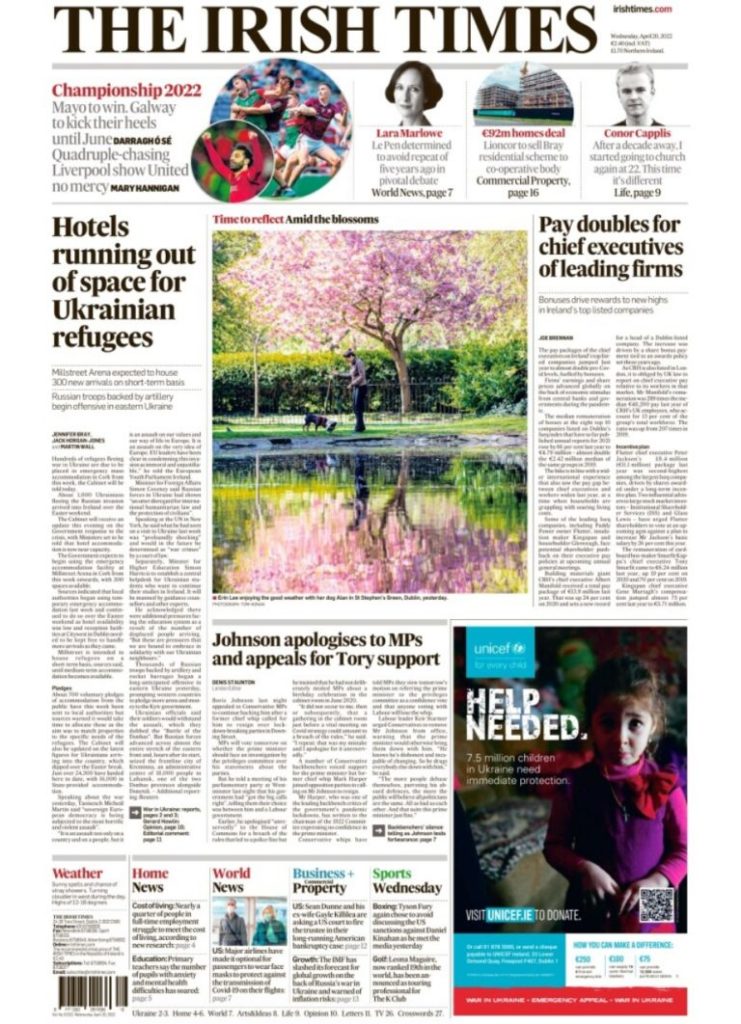 The Irish Sun and Irish Examiner both carry a front-page story on the death of 20-year-old Kate Moran, who died on Tuesday following an accident in a club camogie match in Co Galway between Athenry and Ardrahan. 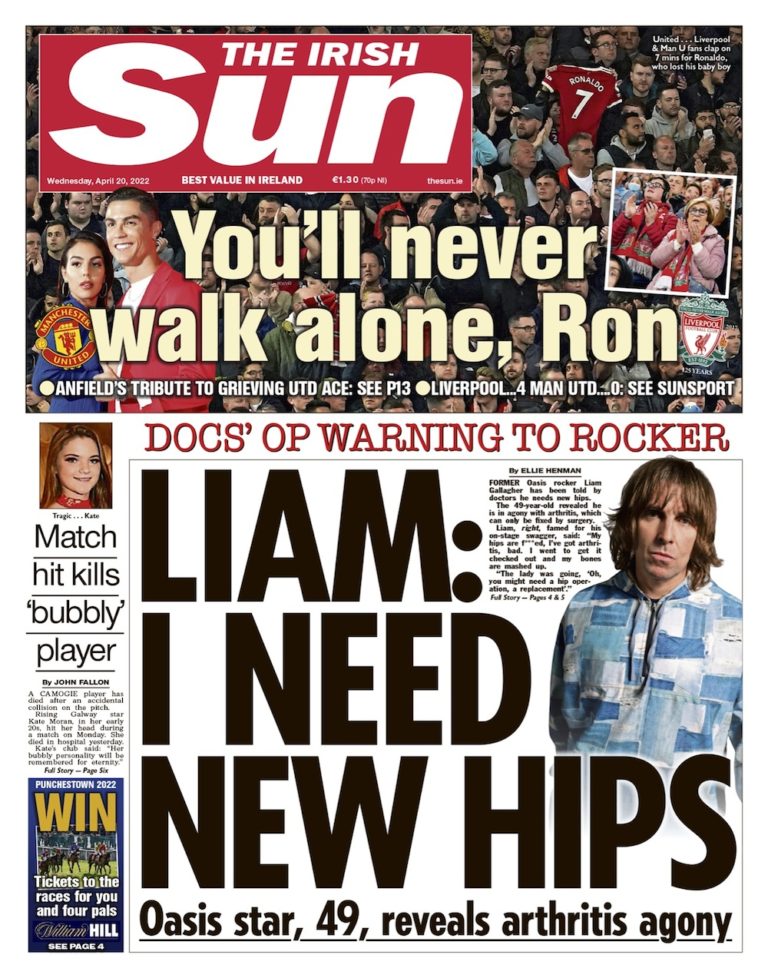 The Examiner also covers the ongoing teachers’ unions conferences, at which pay and exam reforms topped the agenda. Minister for Education Norma Foley addressed the conference of the Association of Secondary Teachers in Ireland (ASTI) on Tuesday, during which she was interrupted and heckled by the crowd. 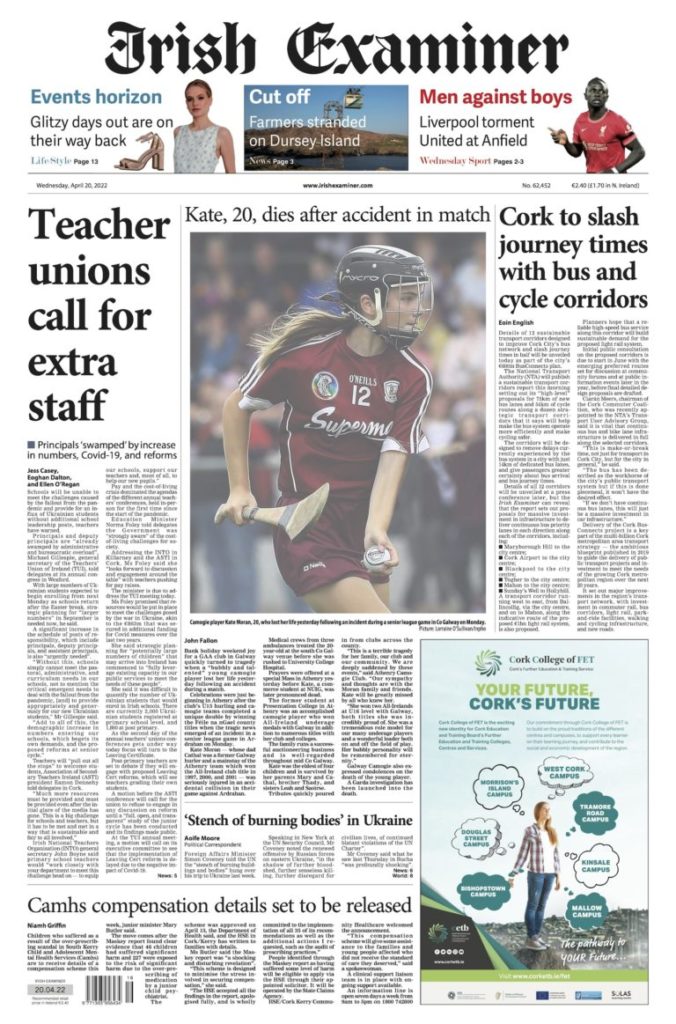 The Irish Daily Mail also leads with the teachers’ conference, reporting that unions are vowing to “fight tooth and nail for up to €6,000 salary boost to fight inflation”. 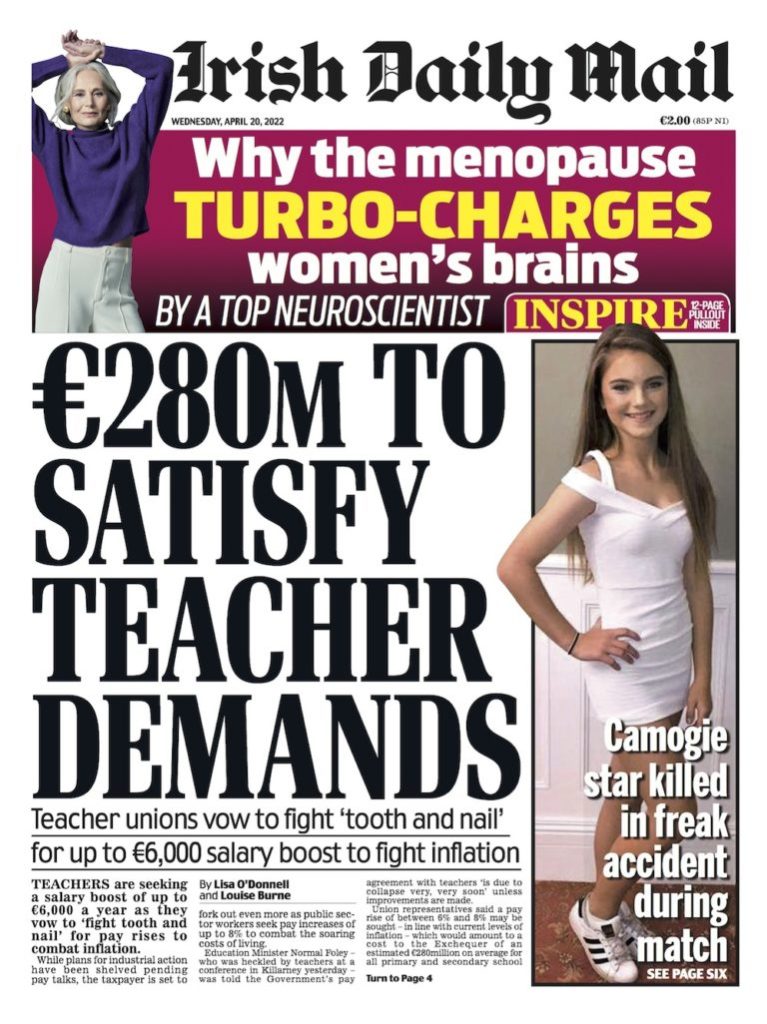 Finally, The Echo reports that teachers are “struggling”, quoting former ASTI president Ann Piggott as saying the Government “must learn to listen to the concerns of teachers”. 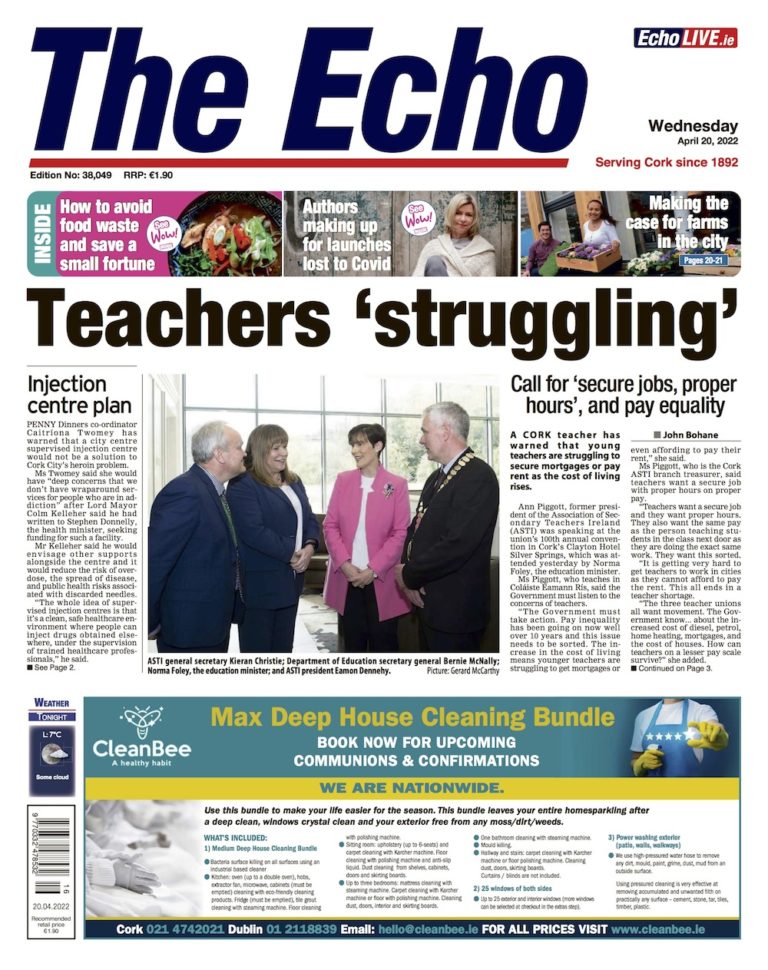 In the UK, the front pages are dominated by British prime minister Boris Johnson’s lockdown law-breaking as MPs consider a Labour motion that would trigger an investigation with significant implications.

“A man without shame”, The Guardian says, quoting UK Labour leader Sir Keir Starmer who accused Mr Johnson of dishonesty during a furious exchange on Tuesday.

The i and The Independent lead with former chief Conservative whip Mark Harper’s call for Mr Johnson to quit over party fine, telling him he is “not worthy of great office”.

The Daily Mirror carries “a message to Tory MPs” as they prepare to vote on whether to probe claims Mr Johnson misled the UK parliament over Downing Street lockdown parties.

The Times reports government MPs have been told by Mr Johnson to block the proposed inquiry.

Metro‘s headline features the apology itself and cheekily adds that “it did not occur to (the PM) that (he) broke (his) own Covid laws at Downing St bash”.

The Daily Express appears more sympathetic in its coverage of Mr Johnson and his “humble apology”, declaring: “What a waste of time! So much more is at stake.”

Tomorrow’s front page: What a waste of time! So much more is at stake#TomorrowsPapersToday https://t.co/Dq8izU0Rcx pic.twitter.com/NfgzNdiecj

The Daily Telegraph covers Mr Johnson saying the BBC has been “more critical of No 10 than Putin”.

The prime minister undergoes the Daily Star photoshop treatment in its splash, depicting him as Star Trek’s Worf in a pun-inspired reference to the character’s species, hence he is the “Klingon PM”.

Elsewhere, The Daily Mail claims that under a new Highway Code for self-driving cars which will reportedly be introduced later this year, people will be able to watch the TV and browse their phones while behind the wheel.

And the Financial Times reports Britain is due for the slowest growth among G7 nations due to “truly horrific” rising energy bills.