KILDARE senior hurling manager, David Herity, and his management team have made two changes on the team for the vital Round 3 game against Derry in the Christy Ring Cup in St Conleth’s Park on Saturday, throw in 2pm. 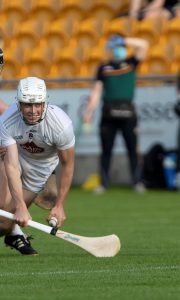 Conan Boran of Naas, one of two changes on the Kildare hurling team to face Derry in the Christy Ring Cup Round 3 on Saturday Photo: Sean Brilly

Young Naas hurler, Conan Boran, joins his brother, Rian and Paul Dolan in the half back line with Kevin Whelan stepping down to the bench. Vastly experienced Coill Dubh’s Mark Delaney, who made a great impression when introduced against London last week, retains his place at full forward where he replaces Shane Ryan, who is now on the bench.

This is reckoned to be Kildare’s toughest contest but a tightening up at the back and a continued ruthlessness in front of goals should be enough for the Lilywhites to continue their winning ways on home soil,