PATRICIAN Secondary School, Newbridge will appear in only their second final when they take on Wexford CBS in the Leinster Minor Cup (U15) Final at 12 noon in Burrin AFC, Ballon in Carlow on Tuesday afternoon.
The Newbridge boys beat Dublin’s Drimnagh Castle 3-1 in Round 1 before easily accounting for Palmerstown 6-1 in Round 2. 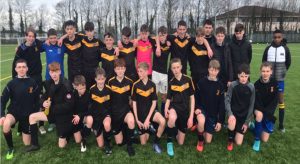 The Patrician Secondary School, Newbridge team which will take on Wexford CBS in the Leinster Minor Cup Final in Burrin AFC, Ballon, Carlow at 12 noon on Tuesday

It was a lot tighter in the last 16 Kildare Derby where Patrician Secondary School, Newbridge and Salesians Celbridge had to go to extra time before the Newbridge side emerged 3-1 winners. In the quarter final Patricians defeated St McDara’s 2-0 and they accounted for Drogheda 2-1 in the semi final.

The Patrician Secondary School, Newbridge squad full of talent including goalkeeper, Sean Hall, who is with St Patrick’s Athletic, and defender Moses Uchendu who is with UCD. Midfielders Sam Neville and Luke Mahon are with Klub Kildare while defenders Thomas Rooney and Dylan Dunne are with Newbridge Town and Ethan Cheese is with Bray Wanderers.

The team is managed by Ronan Tuite and they are sponsored by Manguard Plus and Joe Monaghan Catering.