THE crowds returned to Punchestown on Tuesday for the first time since 2019 and they saw Gordon Elliott have a four timer and Willie Mullins winning two of the Grade 1’s with Energumene and Capodanno. 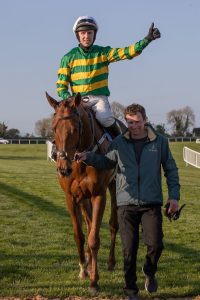 Henry de Bromhead’s Bob Olinger, with Rachael Blackmore on board was clear favourite for this one although the step up to 3 miles raised concerns and Walsh and Capodanno more or less controlled things throughout winning comfortably as a 11/4 second favourite chance.

Bob Olinger faded on the second circuit and eventually pulled up.

Speaking to the Kildare Nationalist after the race a delighted Mark Walsh said of the race, “All went to plan. We popped out good and handy and Robert Power went a good gallop. We might have jumped to the front down the back last time but I was always happy that he would stay the three mile very well. I was always happy with how he was jumping and travelling and when I gave him the squeeze into the straight he picked up well and it worked out well.”

Reacting to the suggestion that he was always in control the Clane man said, “Yeah he was always in his comfort zone and and jumping his way there the whole time so I was very happy with how the race went. I was expecting Bob Olinger or something to come to me but I knew we went a proper good gallop but nothing came to me so it worked out well.”

Reflecting on the notice that Capodanno was getting before the race Mark Walsh said, “He won here at the Festival last year over hurdles so we knew he’d stay the three miles very well. He’s after winning a Grade 1 at the Festival now and we are delighted with that.”

With the crowds back at Punchestown for the first time since 2019, over 14,500 attended on Day 1 and with advance bookings 75% ahead of that year bumper crowds are expected for the rest of the week. “It was a lonely place here last year with no crowds. It just wasn’t the same so it’s great to see the crowds here and everyone enjoying themselves, that’s what it’s all about,” Mark Walsh concluded.

The Punchestown Festival continues until Saturday 29 April with three Grade 1’s on Wednesday, the Irish Mirror Novice Hurdle, the Ladbrokes Punchestown Gold Cup, where last year’s winner, Clan Des Obeaux, takes on the likes of Allaho and Minella Indo, and the Bumper where the new wonder horse, the unbeaten Facile Vega, son of the great Quevega, owned by the Hammer and Trowel Syndicate from Clane, takes on American Mike again.