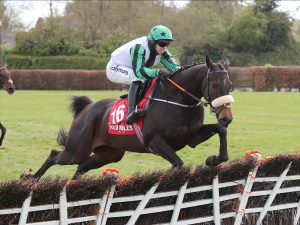 The 131-rated I A Connect represents Gordon Elliott and the McNeill family with the consistent Sam’s Choice representing the trainer and the Lyreen Syndicate.
Glengouly was a winner of the RED MILLS Irish EBF Ladies Auction Maiden Hurdle at Gowran Park and then followed up to win the RED MILLS Irish EBF Auction Novice Hurdle at Leopardstown for Willie Mullins and looks a strong contender for the champion trainer.
Choice Of Words will represent Martin Brassil when carrying the colours of Bernardine and Sean Mulryan and the Curragh-based trainer is looking forward to contesting Wednesday’s race.
Darragh O’Keeffe will once again partner the mare who contested the Ryanair Mares’ Novices’ Hurdle last time out.
“Choice Of Words seems well,” said Brassil. “She came home from Cheltenham well and we’re happy with her at the moment so she might have some type of chance.
“The trip would have been too short for her at Cheltenham and the ground was probably drier than ideal, which it might be in Punchestown too, but they are watering and we’ll see what they’re calling the ground tomorrow.
“This is a good series to have in racing, for those kind of middle-range-priced stores. The maidens are 20 grand races and then the novices and it’s good to have a nice race at the end in Punchestown to compete for.
“City Island won a novice race in the series at Naas before he won the Ballymore at Cheltenham three years ago. It shows the quality of horse you can get in that price range. He only cost 31 grand and a series like this one is a great incentive to buy those horses.
“I would love to have a winner at the Punchestown festival, but wouldn’t anyone? It’s a big week.”
The RED MILLS Irish EBF Auction Series Final will be the second race on Wednesday and has proved to be an extremely popular initiative since its introduction.
Now in its fourth year, the series was designed to create opportunities for horses bought for €45,000/€30,000 or less at store sales in Ireland and the UK, thereby, giving owners and trainers an opportunity to claim some of the €395,000 prize money on offer. To enter the €75,000 final at the Punchestown festival, horses must have run in one of the 16 qualifiers and have not won a listed race or a Grade 1, 2 or 3 race.
Nessa Joyce, Irish EBF Manager, said; “Now in its fourth season, the Connolly’s Red Mills Irish EBF Auction Series has firmly established itself as a valuable target for connections of EBF eligible store horses, bought at auction. This season, two new races were added to bring the total number of qualifying races up to 16 which then culminates in this week’s exciting €75,000 final at the Punchestown Festival. Nearly 80 different trainers have campaigned 117 horses in the series from last May and the entries for the final have whittled it down to 17 horses from 14 different yards which includes seven series winners. The Irish EBF board would like to thank all the connections for supporting the series and the final and special thanks goes to our sponsorship partners Connolly’s Red Mills for their continuing generous support.”
Gareth Connolly, CEO, Connolly’s RED MILLS, added; “This has been a long time coming and we’re delighted for the team at Punchestown that they’ll be welcoming back racegoers to this year’s highly anticipated Festival. This is the fourth year that Punchestown will host the €75,000 RED MILLS Irish EBF Auction Series Hurdle Final but only the second time in front of a crowd and it will be great to have the crowds and connections back to savour the occasion.”
It was also revealed last week that Connolly’s RED MILLS will generously sponsor the Stable Staff yard canteen each day of the 2022 Punchestown Festival. The five day season finale at Punchestown is a demanding schedule and Connolly’s Red Mills recognise the importance of ensuring the stable staff are well catered for. Their support will ensure that the hard working yard teams will enjoy complimentary selection of hot dishes, sandwiches, snacks, pastries, tea and coffee throughout their Festival day.