LOOKING back at the first two days racing Mighty Potter’s win in the first Grade 1 probably stands out but it wasn’t a massive surprise to me. The surprise to me was that Willie Mullins didn’t win it. We all thought Dysart Dynamo and Sir Gerhard were the match up race and there was talk of nothing else. 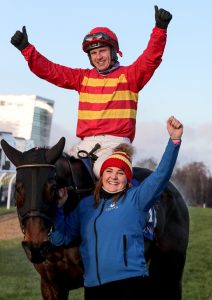 Dysart Dynamo was found to have a defibrillating heart afterwards and Sir Gerhard looked do flat all the way so obviously he didn’t come out of his Cheltenham run too well. On the other hand Mighty Potter was always very comfortable in the race.

In the first of our two Grade 1’s on Thursday, Day 3 of Punchestown Festival 2022, the Ladbrokes Stayers Hurdle, we have Klassical Dream, who was 5th in the Stayers at Cheltenham behind Flooring Porter. We also have Paisley Park who was 3rd in that one as well and we have a few others taking each other on again.

Willie Mullins’ Klassical Dream with Paul Townend on board, is favourite for this with Sire Du Berlais for Gordon Elliott and Mark Walsh. Willie and Gordon have probably won 90% of the races over the first two days.

The Punchestown Hurdles tract is a real front runners track so that will play into Klassical Dream’s favour however I’m very much a Paisley Park fan but I just don’t know if the track will bring out the best in him. It’s not really a stayers track in Punchestown, it’s more of a quick track so you’d have to side with Klassical Dream in that regard.

The task will be to try and keep Klassical Dream covered up and settled. Sire Du Berlais won the Aintree Hurdle beating Flooring Porter so you would hope that he comes back here fresh as it’s only two weeks since Aintree. Klassical Dream and Paisley Park on the other hand, have had a bit more time to recover.

If I was going to go for an outsider in the Stayers I might take a chance on Vanillier for Gordon Cromwell and Keith Donoghue, who has been chasing recently and to me hasn’t really taken to fences. He has just never really got to the heights that we expected after been such a good hurdlers that won the Albert Bartlett in Cheltenham last year so maybe if he sees a hurdle again he might come back to his form and be a lively outsider here.

It’s hard to get away from Klassical Dream, though, we know he’s very good and the track is going to suit him.

The second Grade 1 on Day 3 is the Barberstown Castle Novice Steeplechase and it’s great to see great local sponsors involved.

Willie Mullins horse, Gentleman de Mee, an Aintree winner beating the Arkle winner Edwardstone, the definite favourite, has withdrawn. Blue Lord for Willie and Paul Townend, was third  in Cheltenham but I was disappointed with him on the day.

See this week’s Kildare Nationalist, in your shops now or on line at www.kildare-nationalist.ie , for our Punchestown Special and watch out for “Slippers’” on line predictions for Day 4 and 5.