IT’S Friday, it’s Ladies Day and it’s also Honeysuckle Day on Day 4 of Punchestown 2022 and what an historic day it should be. 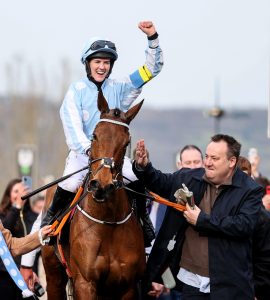 Everyone will get the chance to see the great Rachael Blackmore and Honeysuckle in the Paddy Power Champion Hurdle. It should all be about Honeysuckle but we have to bring in the fact that Henry de Bromhead’s horses have been underperforming all week although it was good to see him get a bit of success on Thursday. Yet again it was the same problem here for Henry last year but Honeysuckle still brought the goods and that just goes to show how good the mare is.

There is nothing that is turning up here in the Champion Hurdle that Honeysuckle hasn’t beaten and there is no new pretender here. Obviously Constitution Hill didn’t come over.

She is 1/5 in the betting and the next price is 8/1 so that tells it’s own story. I’m just hoping that the crowd come to see her. She’s an unbelievable mare with this unbeaten record of 15 from 15 now and if you take her Point to Point then it’s 16 wins. Long may it last for her.

I know Willie Mullins is on fire as he always is in Punchestown but his horse Saint Roi has to improve 10lbs to get close to Honeysuckle and that’s just to get closer to her. I can’t see Honeysuckle beaten.

Robbie Power will finish his career on Teahupoo for Gordon Elliott and what a great career he had and I wish him all the best in his retirement.

In the Grade 1 Alanna Homes Champion Novice Hurdle at 6pm a 3 mile Novice Hurdle. Stateman for Willie Mullins is favourite here. He won the County Hurdle in Cheltenham very snugly and he was obviously better than a handicap hurdler that day.

He’s been thrown in at the deep end here in the Grade 1 so I’m going to side with Gordon Elliott’s horse, Three Stripe Life ridden by Davy Russell who won at Aintree. He’s been in really good form all year and he was second to Sir Gerhard in Cheltenham and also in Leopardstown before that and he was only beaten by Mighty Potter at Christmas.

Kilcruit runs here for Willie Mullins and son Patrick. He ran in the Supreme Novices Hurdle but was beaten 25 lengths by Constitution Hill so he’s needs a massive improvement in form to get involved here.  It’s massive step up for Stateman from Handicap company to Grade 1 company too so I would be taking on Willie Mullins with Three Stripe Life and Gordon Elliott.