ON the day that Kildare U20 footballers won their second Leinster Championship it was also quite a successful day for Kildare on the track on Day 3 at Punchestown 2022, Champion Stayers Hurdle Day.

It was also the day that Robbie “Puppy” Power, long associated with Jessica Harrington’s Moone Stables,  announced that he would retire following his ride on Teahupoo for Gordon Elliott in the Paddy Power Champion Hurdle on Friday. 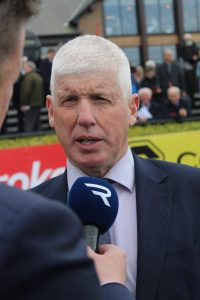 Trainer, Philip Dempsey, after his win on Broomfield Hall, ridden by his son, Luke, at Punchestown on Thursday. Photo: Martin Rowe

The day started off with the father and son combination of Philip and Luke Dempsey winning the opening race, The Specialist Joinery Group Handicap Hurdle, with Broomfield Hall, a 10/1 chance.

Speaking to the Kildare Nationalist after the race trainer Philip said, “It was her first handicap and it went straight forward. She jumped quite well, got a bit tight turning in but jumped the last well.” Asked about winning on his local track Philip said, “Sure it’s great to come here and get a winner. We were the lucky ones during Covid we could come racing and it kept going and it kept us all in jobs but it’s great to see the crowds back with their enthusiasm. You feed off that, if you win anyway,” he laughed. 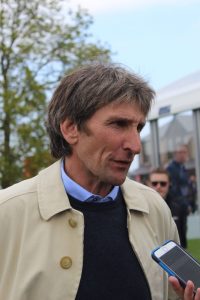 Kildare trainer, Peter Maher, after his win in the Cross Country at Punchestown Photo: Martin Rowe

Fifteen year old Ballyboker Bridge was the hero of the day for trainer, Peter Maher, winning The Mongey Communications La Touche Cup Cross Country race at 14/1. Maher became well know with another cross country specialist, Big Siu. Speaking to the Kildare Nationalist after his latest win in the famous Punchestown race Peter Maher said, “We’re cross country people so we were always going to come here. That’s our 9th cross country win. We can train other winners but we just love the cross country. He was lightly raced, he only runs three or four times a year but that will be his last one.”

It was almost a fairytale day for retiring jockey, Robbie Power, who put in a great performance on Jessica Harrington’s Ashdale Bob before losing out to Willie Mullins’ Klassical Dream in the Grade 1 Ladbrokes Champion Stayers Hurdle.

Trainer Jessica Harrington spoke to the Kildare Nationalist after the race saying, “He ran a great race. He’s had a bit of a frustrating year. He was a good novice last year, second in the Grade 1 here in Punchestown. We went jumping fences with him but it didn’t work out. After he ran badly in Leopardstown we said we’d go back to hurdles and he’s been second three times now. He’ll go out to grass now and we’ll train him for the Stayers Hurdle in Cheltenham next year.”

Speaking of Robbie Power, Harrington had this to say, “It was a brilliant combination and I will miss him but I’m delighted he’s retiring all in one piece and that’s the main thing.”

There was further success for Kildare when A Great View won The Conway Piling Handicap Hurdle for Denis Cullen at 10/1.

Racing continues in Punchestown on Friday and Saturday with Friday designated as Ladies Day and punters will have the chance to see the great Honeysuckle and Rachael Blackmore in action.

See Niall “Slippers” predictions for Day 4 and Day 5 of Punchestown on www.kildare-nationalist.ie