PUNCHESTOWN is all about family, community and locality and that was proven yet again on Friday, Day 4 of Festival 2022, when a record 40,984 patrons came to see Honeysuckle and Rachael Blackmore bring their unbeaten record to 16 and in turn watch Clane’s father and son, the Cribbin’s Peter and Iain, win the opening race, The Stanley Asphalt Hunters Steeplechase for the Bishopscourt Cup with Jezarus, a 15/2 shot, trained by another local, Ted Walsh. 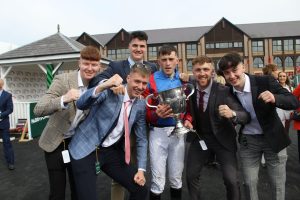 The scenes of joy that were palpable as young Iain steered Jezarus home for his first win on the track turned to tumult as the young Clane man returned to the winning enclosure after the race to be greeted by his father, Peter, the owner, trainer, Ted Walsh, and a massive crowd of Iain fellow Clane GAA players and supporters.

Speaking to the Kildare Nationalist Ted Walsh said, “Iain is a grand young fella, he plays football for Clane and this will be as big a thing to him now as some fellas winning a Gold Cup. The horse (Jezarus) has had loads of problems who used to be owned by the Metcalf’s. We gave him a year off and then he broke down a Fairyhouse and we gave him a year and a half off and he then came back and ran a few Point to Points with idea of coming here. The Cribbin’s were mad for him to come here for the Bishopscourt Cup.”

The hero of the hour, jockey Iain Cribbin, told the Kildare Nationalist, “It’s absolutely unreal to do this at our local track and to do it for Mam and Dad and Ted. I’m with Ted for two years now and to give me an opportunity like this is a dream come through. Ted is just a genius, looking after Katie and Ruby so well with them Cheltenham victories, hopefully this means there’s more to come.”

Speaking of the race the clearly delighted winning jockey said, “I was comfortable all the way through. I saw the loose horse at the front going around left and right and Ted being the great mentor said just follow Barry O’Neill (jockey, Alpha Male).”

“I saw Rob James coming up (jockey, Jigginstown King) and I cut him off. Just to beat Barry O’Neill, I’m delighted,” he laughed.