GLENN Ryan and his Kildare Management Team have named their team to face Louth in the Quarter Final of the Leinster Senior Football Championship in Tullamore on Sunday, throw-in 4pm. 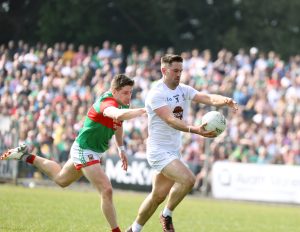 Ben McCormack (Sarsfields) lines out on the ’40 for Kildare in the Leinster SFC Quarter Final V Louth in Tullamore on Sunday Photo: Sean Brilly

Mark Donnellan (Maynooth) gets the nod to start in goals after alternating with Carbury’s Aaron O’Neill  throughout the Allianz League.

The full back line remains in tact as Mick O’Grady (Celbridge) will again captain the side from the right corner back position with Shea Ryan (Sarsfields) and Ryan Houlihan (Moorefield) completing the line.

In the half-back line Kevin Flynn (Celbridge) is restored to the half back line after playing at midfield or wing forward during the Division 1 League campaign and he is joined by James Murray (Moorefield) and Tony Archbold (Celbridge).

Kevin Flynn (Athy) has a new midfield partner in the powerful Kevin O’Callaghan from Celbridge.

In the forwards Alex Beirne (Naas) slots in to the half forward like along with Ben McCormack (Sarsfields) and Paul Cribbin (Johnstownbridge) while in the full forward line Clane’s Brian Mcloughlin gets the nod at right corner forward where he joins the exciting duo of Daniel Flynn (Johnstownbridge) and Jimmy Hyland (Ballyteague).

Mickey Harte’s Louth had a comfortable 5-10 to 0-10 victory over Carlow on Sunday last. Captain, Sam Mulroy contributed 2-5 to that total with a further 1-1 each coming from Conor Grimes and Tommy Durnin.