Glenn Concentrates On The Championship Now

WHEN Kildare Manager, Glenn Ryan, met the local media on Thursday of last week he didn’t know who his side would face in the Leinster SFC Quarter Final on Sunday next. That fact didn’t seem to worry Glenn though as he told us, “at the end of the day it doesn’t matter who we are playing once we put the focus on getting ourselves right and getting ourselves ready for the game.” 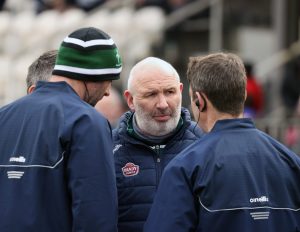 He knows now that it is Mickey Harte’s Louth that Kildare will face after the Wee County’s demolition of Niall Carew’s Carlow in Navan on Sunday, 5-10 to 0-10.

The Kildare manager will know too that Louth have upset Kildare in the past, not least in 1991 in Micko’s first championship with Kildare. If the current Kildare manager had any concerns in that regard he wasn’t displaying them to us in Hawkfield as he reported, “nothing to worry about on the injury front apart from Eoin Doyle but hopefully he’s on the road to recovery too.”

“The League is over we’re preparing for a championship now,” was the battle cry.  Reflecting on that League and on the suggestion that he gave youth its fling the manager had this to say, “We gave youth their fling but we gave fellas an opportunity who worked hard to get that opportunity and hopefully we gave them the chances to put their best foot forward.”

On taking up the role as manager some six months or so ago Glenn reflected, “From my own perspective I’m not sure what the expectations were. I knew it was something that would be challenging and enjoyable and frustrating in equal measures at different stages so it hasn’t disappointed in that regard. We didn’t come into it to get enjoyment out of it. We have a good crew of fellas there in the backroom working with me, good fellas to be around and good pals of mine. And the players have been top class in terms of dealing with them and that’s all you can ask for,” he said.

With the minors through to a semi final and the U20’s through to a Leinster Final the senior manager was quite pleased with the working relationship between the three sets on management teams.

“I’d like to think that the managements of the U17’s, 20’s and ourselves are very much Kildare football at the centre point of what it is we are trying to do and we are all working together,  I benefit from the U17’s and the U20’s and vice versa. The great thing is that it seems to be a coordinated effort where everybody is trying to make sure that we get the best out of the people who come through those gates to make them better footballers at the end of the day. The intention is that they are the ones who benefit and reap the rewards along with the supporters in the county.”

“Ultimately we are disappointed at how the League went but you’d like to think that throughout the League we gave the supporters something to go along to and moments to cheer and moments to moan about and no different with the minors and U20’s. We are all being competitive. I’ve seen the minors and U20’s playing and they’re all trying to play with their hearts on their sleeve. We’re not going to win the whole time but if you can make our best efforts on each occasion that’s what people want to see,” the Round Towers man added.

What pleased him most about the League we asked? “The most pleasing thing from my perspective, across the board there was a willingness of everybody to help out, the players, the supporters and the Co Board. Everybody tried to collaborate together to try and get the best out of each other and if we can continue going on that road that support will be helpful,” he continued.

Turning again to the championship Glenn Ryan said, “we’re looking to the next game and won’t be looking beyond that. We don’t know who we are playing as yet but in some ways that’s a good thing as we can focus more on ourselves than anything else.”

If Kildare focus on Louth over the next few days they will know that they have won back to back League promotions and won the Division 3 title in Croke Park a couple of weeks ago so they will join the Lilywhites in Division 2 of the Allianz League in 2023. In Mickey Harte and his trusty coach, “Horse” Devlin they have two wily old characters who know what the championship is all about. In Sam Mulroy, their captain, they have someone who is having an outstanding season, scoring 2-4 against Carlow on Sunday last.

Having said all that Kildare have been operating in Division 1 all season and beat Dublin and Monaghan, drew with League champions, Kerry, and but for a kick of a ball in some other games they might well be playing in Division 1 again in 2023. With injuries clearing up, other players becoming available again and a return to form in other cases, Kildare had more or less their best 15 available by the end of the League with perhaps one or two places up for grabs in the halfback and half forward lines.

Getting the combination of youth and experience right will go a long way to overcoming the Louth challenge in Tullamore on Sunday, a task that Kildare are well capable of achieving with the same squad as operated throughout the League.