IN this week’s Kildare Nationalist THE SUPPORTER Column looks at past Kildare V Louth Championship meetings and wonders who might start for Kildare on Sunday in Tullamore.

IT’S funny how the memory plays its little tricks.

One of my earliest games supporting Kildare was a first round championship match against Louth in Navan in the late seventies. The sun was cracking the stones as championship was played in summer back then and it’s always sunny in summer as you know. 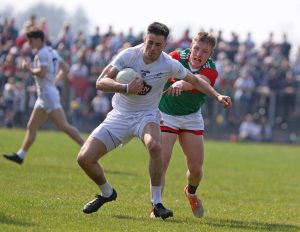 Mick O’Grady will captain Kildare in the Leinster SFC Quarter Final against Louth in Tullamore on Sunday Photo: Sean Brilly

We were seated in that corner between the stand and Navan O’Mahony’s. I’m pretty sure it hasn’t changed from that day to this. TK red lemonade, sunburn, and anyone for the last of the choc-ices there?

In my mind’s eye Kildare dominated from start to finish. Louth were never in it and Kildare ran in four goals on the way to a comfortable win that seemed to surprise the father and the uncle a little whose pessimism when it came to Kildare football both intrigued and educated me at the same time.

As for those tricks of the memory? Whenever I look back on that game I remember being in awe of one Gerry Power. He seemed to have a bit of je ne sais quoi about him. Maybe it was because he shared a name with the Kerry great of that era and Kerry were gods to me at that time. That team still are, with the exception of Pat Spillane of course.

I’m sure it hadn’t registered with me that he was the son of the local FF TD, Paddy. Maybe it was just his surname, which seemed to fit neatly with his pacey running game. Or maybe it was the footwear. Unless my mind is playing tricks he wore those rugby boots of the day that came up over the ankle and had the look of hobnails almost.

He was probably the Daniel Flynn of his day, though maybe without the national attention. When Gerry got the ball the head went down, the boots revved up and he scorched a path towards goal. To my mind he absolutely obliterated Louth that day.

I went looking this week for the match reports of that day last week, one hundred percent confident that it would be the Wee County we’d be meeting next weekend, possibly in Navan again.

A crowd of 9,000 watched although reporter Paul Donaghy in the Nationalist described them as having “dwindling interest” as “Kildare with the clinical efficiency of a surgeon, dissected the red-shirt Louth side which showed admirable energy but absolutely no clue in the scoring department.”

The clinical efficiency of Kildare doesn’t jar with my memory banks but the fact that Louth shot eleven first half wides is a fact I’d long buried. I also note from Donaghy’s despatches that Kildare owed more to the great Tommy Carew than my hero Power on the day.

Carew “torpedoed Louth with some devastating play in the first fourteen minutes, scored 1-4 of Kildare’s first 1-5, making a mockery of the theory that players’ form is blunted after an All Stars trip”. Can you imagine Glenn Ryan letting Jimmy Hyland scoot across to the States a week or two before championship as an All Star replacement?

Ollie Crinnigan, like Carew, playing in his 14th championship, was another whose impact I had forgotten that day. According to Donaghy he was “as sharp as when in the under 21 goal 13 years ago and if he maintains this form will be there for many years to come.” Ollie won his All Star later that year.

But the biggest shock to me is to read now, 43 years later, that far from destroying the wee county with his pace and goalscoring, Power (along with Mickser Condon) “only came into the game in the final quarter.”

He did score two goals in those final, somewhat academic minutes, the first after Carew had done all the hard work and hit the post, the second more in line with my recollections, “when he accelerated passed two defenders before scoring into the Navan town goal.” More Daniel-like for sure.

Louth didn’t really feature much in my consciousness through the next decade or so, nor in truth did Gerry Power, who scored plenty of goals for the Lilywhites but never really fulfilled his potential in the white jersey.

There was a league match in Drogheda that we lost towards the end of the eighties and a couple of O’Byrne Cup reversals but nothing of great note until the paths finally crossed again in the championship in 1991.

No need to look up the match reports for the rest of that story, nor for 1995, 2007 and 2010. Louth have taken on a whole new persona in my psyche and that of the Kildare supporter. Just a quick look at the championship record shows we win about 6 out of 10 against them. That’s nothing to get complacent against.

We also don’t need to remind ourselves surely that we have lost to Wicklow, Carlow, Wexford, Westmeath as well as those times against Louth in recent history. Yes, we’ve been in Division One, yes we reached the Leinster final last year.

That counts for nothing when it comes to Championship and having Mickey Harte in their corner is clearly worth a few extra points. We should remember that the two teams will be in Division Two next year. Equal footing.

The midfield is thankfully settled although the back-up for Feely and Flynn is a little thin on the ground. As for the forwards, I don’t envisage too many changes. The right-half forward spot is still up for grabs with the likes of Beirne, McDermott, Conway and maybe Neil Flynn among the options, although I suspect the latter may start closer to goal if rumours of an injury in the inside line are proven to be correct.

Does Daniel start? Not a question we’d be accustomed to asking. But if there’s a full-strength forward division to choose from maybe it’s not totally outrageous to suggest bringing him into a game when things have opened up a bit?

Whoever lines up in white, any complacency could be punished by Harte’s side. Glenn suffered in Drogheda in 1991 to these boys and we’ll have to hope that experience will be brought to bear on Sunday. Kildare to win. Just. Am I confident? About 60%.

THE SUPPORTER column appears in the Kildare Nationalist, in your shops each Tuesday.