KILDARE made light of the Louth challenge on the way to a comprehensive sixteen-point win in Sunday afternoon’s Leinster Senior Football Championship Quarter Final in O’Connor Park, Tullamore. 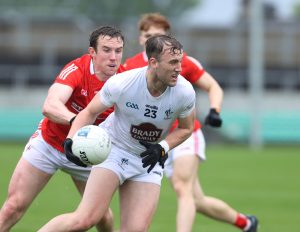 Fine performance off the bench by Darragh Kirwan in the Leinster SFC game V Louth in Tullamore on Sunday Photo: Sean BrillyAfter a winter of Division 1 football, Kildare’s conditioning, tackling, and finishing was clearly superior to the Division 3 champions, who now go into the Qualifiers.

The Lilywhites scorched into a seven-point lead before Louth had even troubled the scoreboard, Mickey Harte’s men failing to do so until the 18th minute. By half-time Kildare were eight points clear (0-13 to 0-5) with Ben McCormack, Daniel Flynn and Jimmy Hyland leading the Louth defence a merry dance and each of the Kildare forwards getting on the scoreboard from play.

Louth were unfortunate to squander a glorious goal chance in the 27th minute, a handpassing move across the Kildare defence involving four players and ending with Liam Jackson palming to the empty net, but from a position clearly within the square. An earlier double save by Mark Donnellan from Bevan Duffy was another let-off despite Kildare’s dominance.

If the game seemed over at the interval, Louth had other ideas, and with them now pushing up on Kildare kick-outs and forcing Mark Donnellan to go long, they turned over a couple of those restarts as they fired over three quick-fire points to narrow the margin to five points.

After ten scoreless minutes for Kildare after the restart, a flare-up on the stand side, which ended with Alex Beirne and Kevin O’Callaghan requiring new jerseys, seemed to re-energise Glenn Ryan’s charges and when the mercurial Daniel Flynn slalomed towards goal, a foul by Niall Sharkey drew outstretched arms from referee David Gough.

Kevin Feely slotted the penalty into the bottom right corner with aplomb, and Kildare had seen off any Louth revival. They scored four of the next six points, two coming from impressive substitute Darragh Kirwan with one each from Cribbin and Hyland, stretching the lead to ten points by the 54th minute.

Louth went down to 14 men with influential full forward Conor Grimes receiving a second yellow on 66 minutes and Kildare piled on the agony. McCormack’s fourth from play was delightful and Kirwan brought his quickfire tally to 1-3 with a free.

Paddy Woodgate was another to impress from the bench scoring two points and combining with Tony Archbold to set up Kirwan to sweep the second goal to the net soccer-style in the first minute of injury time.

The strong-running Paul Cribbin fisted over his third point of the day to round off a sixteen-point success for the Lilywhites and secure a semi-final against Westmeath.