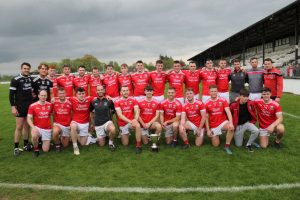 The Athy Squad, winners of the Aldridge Cup by defeating Celbridge in the Final on Bank Holiday Monday in St Conleth’s Park Photo: Martin Rowe

Played in front of a small crowd it was former County man Paddy Brophy who registered the opening score for Celbridge. By the 17th minute he had added two more from frees. Athy, for their part, had plenty of possession but kicked too many wides but still led  by a point 0-4 to 0-3 after 22 minutes courtesy of  points from Paudie Behan with two and one each from Paschal Connell and Kieran Farrell.

Paddy Brophy scored his third free and fourth points  of the game to level it on 24 minutes. Brophy again and Paschal Connell  swapped points in the 26th and 27th minutes to keep it level. Paddy Brophy’s  an excellent score off the right boot  as he came in from the left. Two late Paudie Behan frees left Athy 0-7 to 0-5 ahead at the break.

On the resumption Athy upped the  pace considerably and  two points in the 35th and 36th minutes through Shane Jackman and Kieran Farrell pushed the lead out to four.  As darkness descended Paschal Connell and Barry Kelly made it  six with two excellent scores from play.

Celbridge hit four wides in a row as they failed to trouble the umpires bur at the other end Athy were prolific with their possession and by the 46st  minute Oisin O’Rourke, Ben Purcell and a Paudie Behan free opened a nine point gap.

Athy rang the changes with five subs by 47 minutes but this only pushed them on. Their superior work rate keeping Celbridge at bay until the 58th minute when two late points from Niall Donnelly and Liam O’Flynn brought their total to 0-7 points.

Athy had time for a final minute  Sean Ronan goal to put the gloss on a good performance.