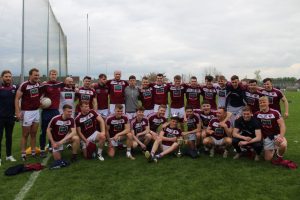 Leixlip, winners of the Keogh Cup in Newbridge on Monday Photo: Martin Rowe

The opening half ended with Leixlip leading by 0-10 to 0-8 courtesy of four Tommy Moolick points. Moolick opened the scoring inside 60 seconds but it was  Castledermot who were  dominant in the early stages and after   Gavin Keating pointed  from a free after three they pushed two clear through Paul Fitzgerald and the lively Emmet O’Keeffe.

Leixlip with Brian Claffey gaining the upper hand around the middle quickly drew level with points from a Jack Barrett free and Conor Lawlor. Gavin Keating and Emmet O’Keeffe swapped points with two excellent Moolick efforts as the teams were level after the opening quarter.

Jack Barrett got his first from play after good work from Moolick and almost immediately Brian Claffey had Leixlip two ahead for the first time. It was a lead they maintained to the break as both teams kicked three points each in a very open game. Paddy Meagher, Moolick and Barrett for Leixlip with Paddy Whelan, Paul Fitzgerald and the reliable Gavin Keating with his third replying for Castledermot to leave it 0-10 to 0-8.

The second half began with Leixlip extending the lead through Conor Lawlor and Moolick  before a Gavin Keating free, after Emmet O’ Keeffe was fouled reduced the gap to 3 after 33 minutes. Three Jack Barrett frees pushed Leixlip 5 ahead and it looked like their name was on the trophy Emmet O Keeffe and Gavin Keating reduced the gap to four after 48 and by the 55th minute  two Emmet O Keeffe  points and one from Gavin Farrell left the minimum between the teams.

Within 60 seconds Leixlip had moved 5 ahead again Jack Barrett’s with his  7th of the game and after a mix up in the Leixlip defence Tommy Moolick was on hand to knock home the goal after Shane Nolan had fumbled Ronan Fitzsimons long range effort.

Castledermot weren’t wanting for effort in the closing minutes and when Emmet O Keeffe goaled on 30 minutes the gap was back to two. Gavin Keating pointed a free but Castledermot ran out of time as Leixlip were left hanging on.

No doubt these teams will be around come the business end of the Intermediate Championship.