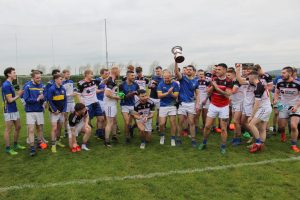 Points from Nathan Doyle, Oran Bergin, Conall Bergin and Brian Cullen around a Oran Bergin goal ensured left Grange in a strong position at the break as a Joseph Toman point before the break is all Rathcoffey could muster in reply to the dominant Grange attack.

On the restart Grange continued their dominance despite the efforts of Rathcoffey to make the tie more competitive. Two Rathcoffey frees did little to change the momentum of the fixture with Grange hitting eight in reply.

With the tie heading into the final ten minutes a host of changes allowed Rathcoffey to gain a foothold as three late points looked to take the disappointment off the watching supports faces as they finished strong with a league campaign now awaiting them while Grange were left celebrating a first piece of silverware in some time.