Leave Off The Lilies – They’re OUR Team – The Supporter

THE Supporter column in this week’s Kildare Nationalist, in your shops now or on line at www.kildare-nationalist.ie, gives views and thoughts of Kildare teams in Championship action in the past week

TG4 rightly get praised for their remarkable coverage of Gaelic Games across all codes and grades. I’d swear they’re doing more for the Irish language than a million readings of Diarmuid Agus Gráinne or whatever they beat into them in school these days. 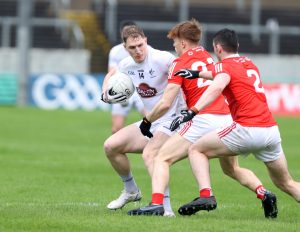 It’s remarkable at the same time, and no fault of TG4 who don’t have the rights, that a game pitting Division 3 champions managed by the legendary Mickey Harte with one of the best supported counties in the country passes by with only a couple of minutes of highlights on RTÉ’s consistently awful Sunday Game. How do you miss a disallowed own goal, the closest Louth came to a high point in the opening half?

Limiting access to games to those with the capacity to travel can have its benefits, though. There’s a relatively well-known Kildare man living overseas who brings to mind the quote that “those that spend their time looking for faults in others usually spend no time to correct their own.”

He used to write for this paper as a GAA reporter but has long since moved on to bigger and better things, with all due respect to provincial GAA reporters.

Most Kildare supporters, certainly those who were in Portlaoise last Thursday were revelling in the performance of a team that combined guts, aggression, and no little skill to add an under-20 provincial title to the under-17 one a handful of them had won three years previously.

Meanwhile, our man, benefitting from TG4’s super coverage, was taking to the tweet machine with his own hot take on the action.

“This has to be the single worst provincial final at adult level (senior, under-21, under-20) I have ever seen, the worst Kildare team ever to win one, the worst Dublin team ever to be in one. The mistakes all round were appalling.”

He goes on to summarise the story of a game which was end-to-end and featured a score every two minutes. “Dublin’s defence is genuinely embarrassing, only to be matched by Kildare’s finishing. The story of the under-20 championship? Offaly are wondering how they’re out and Sligo will fancy either of these in the semi.”

Me? I thought that was another magnificent Kildare underage performance on Thursday night and anyone I’ve spoken too since would agree. On this paper’s Square Ball podcast last week the call was for Kildare teams to lay down a marker on Thursday and Sunday, something to give us hope that we can knock Dublin off their perennial perch, one fuelled to be fair to the aforementioned overseas write who has championed the cause for years, by the financial doping which has laid waste to most of Leinster.

The under-20’s certainly laid down that marker, tearing into Dublin with controlled aggression, stripping ball from the Sky Blues attackers, driving through the heart of their defence, and shooting points for fun in the opening fifteen minutes before a touch of the “yips” hit them in the run up to half-time.

They then gathered themselves at half-time and took the game to Dublin once more, charging into a three-point lead before almost getting reeled in again by a Dublin team who were by no means the worst Dublin team to reach a provincial final, their full forward Breathnach a particularly impressive performer.

For sure, Kildare lived dangerously in those final moments, nerves getting the better of the young Dubs, as they had the Lilywhites at times. But heroes are made in such moments and Shane Farrell was certainly that with his catch at the end, setting up young Dalton for the clinching score.

As for “Kildare’s finishing”? They scored 9 points from 11 attempts in the second half when the chips were down, showing the sort of steely nerve that will be needed if Kildare teams are to cement a position as the closest challengers to the Metropolitans in the next few years. No mention of that from our overseas correspondent.

Our man was quiet enough on Sunday, too, no doubt steaming that the judges ignored his latest hot take, scoring the big fight in favour of Amanda Serrano. Is there a Specsavers in Portugal?

Look, everyone’s entitled to their opinion, and this column may have been known to have the odd contrarian one over the years, but we try to call it as we see it without looking for the most negative take on a given situation or performance for the sake of the shock factor.

There was so much to love with Kildare’s performance against Louth, a county who continue to fill a Lilywhite supporter of longer vintage with dread when it comes to Championship. Their own supporters were extremely confident beforehand (are they ever anything else?), lulled into a false sense of their progress by the presence of Harte on the sideline and Division 3 silverware in the trophy cabinet.

Kildare aggressively attacked this game from the throw-in. The score-taking was breath-taking at times. I doubt all six Kildare forwards have scored from play by the 22nd minute in a competitive match before. Open to correction.

That was impressive but it was really the work-rate and physicality of the Kildare players that was most telling, the former exemplified by someone not renowned for having that in his locker. Daniel Flynn seemed to have been given a roving role from full forward and his link-up play with his colleagues was outstanding, exemplified by the little one-two with Ben McCormack that led to the penalty.

Of course, Daniel mixed the sublime with the ridiculous, but on this occasion the former far outweighed the latter. Only Dan could miss a 20-metre mark in front of the posts with his strong foot and a few minutes later take on another one out on the right wing with this weaker foot and nonchalantly split the posts. He almost hit the corner flag with another effort, but the aberrations were few and far between despite the tricky conditions.

Generally, his handling was spot on, his passing crisp and he played with the joy of a man absolutely on top of his game. Dan being Dan really. Louth had no answer.

Westmeath will offer a different prospect. They might have lost to Louth in Division 3 but their championship pedigree outranks the Wee County’s of late. They should have won last year’s semi-final in Croke Park, Kildare owing a lot to more Flynn stardust.

We appear to have improved since Jack O’Connor’s days, to the point where you feel they are relishing the opportunity to go up against Dublin in another final. The draw has been kind, but the same level of effort and aggression will be required against the Lakemen. The same applies to the under-20’s who will carry the favourites tag in Breffni on Saturday.

Unfortunately, that one is being shown by TG4. Victor Meldrew will no doubt be glued to it waiting for the young lads to screw up. You have been warned. After three close games, a battle-hardened Kildare side can prevail against the first-time provincial champions.

The Supporter Column appears in the Kildare Nationalist out each Tuesday