THERE are five players from Kildare Rugby Clubs on the Leinster Junior team Match Day 23 to face Munster in the final game of the interprovincial series at New Ross RFC on Saturday, KO 2.30pm. 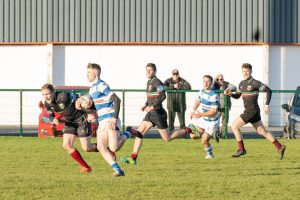 Athy RFC’s Ciaran Fennessy, who was in superb try scoring form for his club this season, has been retained in the centre for Leinster Rugby Junior team’s clash with Munster in New Ross on Saturday Photo: Aisling Hyland

Head Coach, Enda Finn, has retained Athy RFC’s Ciaran Fennessy in the centre while  his club colleague, Craig Miller, has been retained at out half on the side that has one win and one loss from their opening two games.

Will Jennings and Tom Tracey of Newbridge RFC and JJ McIlwrath of Cill Dara RFC have been included as replacement forwards.

This is the only home game the side has in the series, having lost 21-10 away to Ulster in the opening game the recovered to claim a 6-3 victory away to Connacht on Saturday last Saturday.

A win in New Ross on Saturday could see the Blues retain the series in what is a tight battle for this year’s honours.