Kildare Unchanged For U20 All Ireland Semi Final

BRIAN Flanagan and his Kildare U20 Management Team have announced an unchanged team from that which started the Leinster Final against Dublin for Saturday’s Eirgrid U20 All Ireland semi final against Connacht champions, Sligo, in Kingspan Breffni, throw in 4pm. 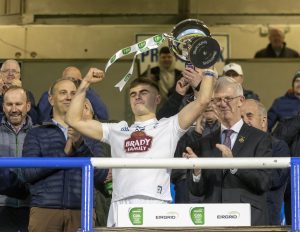 Aaron Browne will again captain the Kildare U20 side for Saturday’s Eirgrid All Ireland semi final against Sligo Photo: Sean Brilly

While Flanagan made five changes during the Dublin game he has retained those who started the Leinster Final and who made such an impression before some of them were replaced by the so called finishers in Portlaoise.

While Kildare had to withstand a late, very late Dublin comeback, they started the game in whirlwind fashion and built up a commanding lead and, but for two saves by Dublin keeper, High O’Sullivan, might well have been out of sight by half time. As it turned out, as in their two previous, they let the opposition back into the game before again taking command in the second half.

Although Shane Farrell was “crowned” official Man of the Match, Kildare had many contenders for the title in a team, that like their senior colleagues, now play with a fluidity that hurts teams.

Sligo won their first ever U20 Connacht title thanks to a late fortuitous goal from Jack Lavin and will provide stiff opposition, thanks to their ability to score goals. Having said that the Kildare defence is unlikely to be as “generous” in allowing green flags as maybe Roscommon and Mayo were.

A Kildare team, playing for a full 60 minutes, as they have done for long periods in the Leinster championship, will be strong enough to overcome the the threat from the West.